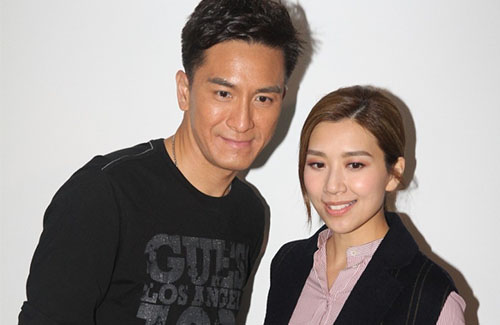 On November 26, the cast of TVB’s supernatural horror drama The Exorcist’s Meter <降魔的> including Kenneth Ma (馬國明) and Mandy Wong (黃智雯) gathered together for a dinner banquet to watch their drama’s final episode. The supernatural series also stars Hubert Wu (胡鴻鈞) and Moon Lau (劉佩玥), and is one of the year’s highest-rated television shows.

Kenneth and Mandy were asked about the rating points that they would like to see for the final episode, but Kenneth remarked that ratings are hard to predict, and said, “Fate will decide.” Mandy, however, gave a much more elaborate response, and said with a laugh, “If ratings are high, then Kenneth should reveal his two points [go shirtless].”

“I just said I’ll treat everyone for dinner! But People would be more interested in seeing your two points,” Kenneth joked. “They wouldn’t care about mine.”

Asking Kenneth if there are plans for a sequel, the actor said, “That depends on the producer. To be honest, many characters already died, but because this is a supernatural show, there are stories that can be continued. We’ll have to see what the producer and writers think.”

With the TVB Anniversary Awards coming up, does Kenneth have the confidence to win TV King? “I’ll leave that to fate,” he said. “As actors, all we can do is to work hard in our roles. Awards is about luck. For example, everyone though this year’s [TV King] was between me and Vincent Wong (王浩信), but Michael Miu (苗僑偉) won in Malaysia instead. It’s not that simple. There are many competitors.”

Pointing out that the success of The Exorcist’s Meter (TEM) is giving Kenneth Ma a good chance to win, he said, “I’m already very lucky. Originally, [TEM] was not meant to be an anniversary drama, but it became one. It’s not like this drama was very expensive to make, and nor was the cast big. I’m already very surprised with these results and turn of events.”

Mandy said she would want TEM win Best Drama the most.