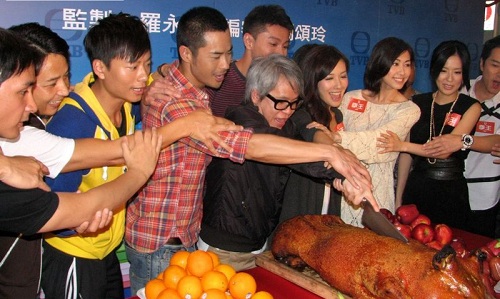 In May, Kevin will be filming a fighting scene with Kenny Wong. Kevin noted that Kenny had a physical advantage but boxing also involved the proper technique. While attending fifth grade in Great Britain, Kevin was in a fight with another student, who made racist remarks. Since Kevin was short in stature, he lost the fight easily. Kevin had not been embroiled in any other fights since the incident.

Natalie Tong was injured while filming Flying Tigers <飛虎> earlier. Reporters teased Natalie and said that she may be able to take a break from fighting scenes.

Playing a mute boxer in The King Boxer, Nancy Wu already trained to build muscle and was not afraid of possessing overly muscular thighs. Btw, when Kevin and Selena Li filmed a passionate kissing scene earlier, there were romantic rumors. I do see Selena as Kevin’s type of woman and see them as a possible couple. Kevin and model, Jenny’s romance was a short-lived one.