Starring Xiao Zhan (肖戰) and Yang Zi (楊紫), Chinese drama The Oath of Love‘s <餘生，請多指教> release date being delayed once again. Originally scheduled to premiere on September 8, the delay raised a commotion among fans and saw the issue trending on search rankings.

Pulled Down by Xiao Zhan…?
Hunan Television announced the delay on Weibo and said that further updates would be released.  According to insider sources, the delay was related to “Operation Qing Lang” and its targeting of unhealthy online behaviors and celebrities with huge followings.

Evoking much attention since filming started, The Oath of Love is a medical romance which many viewers eagerly awaited. While official sources did not announce the delay, apparently loyal fans who got wind of the news had published a post to reassure the rest of the fans, which was why many believe the delay in broadcast date is likely to be true. Xiao Zhan had previously been implicated in a censorship controversy due to his fans’ actions back in 2020, which made many wonder if The Oath of Love will eventually be aired. 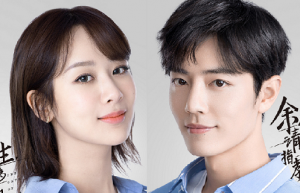 Yang Zi Has More to Lose
Since both of its leads Yang Zi and Xiao Zhan are celebrities with huge fanbases, news of the delay this time round was intentionally kept low-profile to avoid controversy. In addition, the months of September and October were usually reserved for mainstream dramas, so idol drama The Oath of Love was not so suitable.

While some fans feel that the continuous change in its release will affect viewer interest in the series, others are more accepting of the delay as long as the drama will eventually be aired. Any changes to The Oath of Love’s broadcast will likely be greater for Yang Zi, who already had a previous drama, big-budget costume series The Golden Hairpin <青簪行> getting taken off due to the Kris Wu (吳亦凡) saga. Fans are therefore concerned that she will lose another chance of onscreen exposure if The Oath of Love is eventually shelved as well.