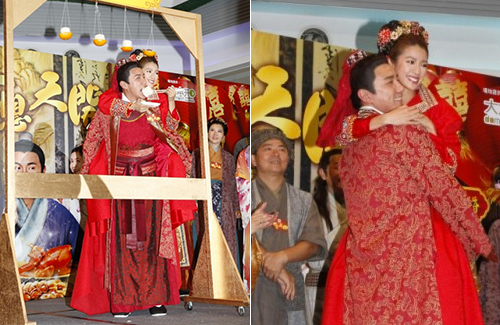 Tony and Sisley were teased like a newlywed couple at the event. Tony had to carry Sisley on his back while Sisley fed him fruit and buns. The onscreen pair even delighted their fans with a few fake kisses. It was to the point where Sisley joked that she should call up Tony’s girlfriend, Natalie Tong (唐詩詠), to let her know what they did.

Asking Sisley if Natalie would be unhappy with their playful interactions, Sisley said, “She would understand. Promotion events like these should be playful and fun. There’s no point of doing it if it’s going to be boring.” (Tony said you were very desperate!) “We all know that Tony Hung doesn’t like to use his brain before he speaks, but having spent three months with him for this drama, we did get along really well. We joked around a lot.”

Sisley, who recently broke up with her boyfriend Shing Mak (麥秋成), was then asked if her “marriage” to Tony had triggered some painful memories about her breakup. Sisley said, “Of course not. I’m really happy right now, because my good friend Snow Suen (孫慧雪) is also getting married today. I’ll be going to her wedding after this. It’s my first time being someone’s bridesmaid. So busy today! Even busier than my drama schedule!” (Any approachable bachelors on the groomsmen’s side?) “I don’t know. I’ll take a look.” (Planning to steal her bouquet?) “No one can beat me into stealing it.”