Dating for two years, Tony Hung (洪永城) and model Inez Leong (梁諾妍) have settled into a stable relationship. Known for his flirtatious side, which made his previous relationships unable to last, Tony has changed his ways since meeting Inez. The couple currently lives together and is considering getting married and having children.

In the past, the 36-year-old actor had a reputation as a player and a man who enjoys his freedom. In 2012, he split up with his non-celebrity girlfriend Emily whom he had dated for four years. It was said that they broke up because he was flirting with other women behind her back.

In 2013, Tony started dating Natalie Tong (唐詩詠). Many did not think the relationship would work out as they have such different personalities. A source said, “His relationship with Natalie was never going to work out, as she was a homebody and he liked being active.” It was hard for Tony to change his flirty ways and they decided it was best to end their two-year relationship.

Inez is a Perfect Fit

After half a year of being single, Tony started dating Inez, a model and marathon trainer. In contrast to his underground relationship with Natalie, Tony has been very upfront with his relationship with Inez because they are so compatible.

After graduating from the University of Toronto, Inez became a full-time model. She currently works as a TV host for ViuTV and Hong Kong Open TV, and is also an ambitious entrepreneur. Obtaining her license as a running instructor and personal trainer, Inez opened a gym in the Central district. She leads a healthy lifestyle and did not have any negative gossip since joining the industry.

A source shared that Tony was definitely a player in the past, but dating Inez made him understand what it is like to truly be comfortable with another person, “Inez is very pure and has a lot of positivity, which makes Tony happy every day. She has an infectious personality, and always prioritizes a healthy lifestyle. After Tony started dating her, he started to pay attention to healthy eating and lifestyle options. Inez is also very independent, and would find things to do [by herself] if Tony is busy working. She is not the clingy type who constantly asks questions.”

Inez praised Tony for having a good temperament and being very attentive. She chose to trust Tony even during his fall out with Rebecca Zhu (朱晨麗), who alluded that he tried to take advantage of her by adding touching and kiss scenes in Wonder Women <多功能老婆>. The source said, “Men are always like this–since she gave him space, he ends up being more invested in the relationship. Tony was right–Inez has an endless list of good traits! It would not be an exaggeration to describe her as beautiful, kindhearted, and caring. To be honest, Tony scored a good one so he is very grateful for the relationship.”

Changes His Attitude Towards Marriage 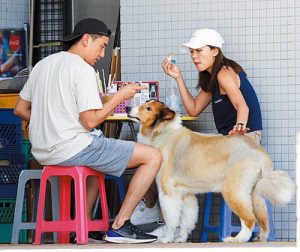 When the couple found it difficult to meet frequently because of their busy schedules, Tony convinced Inez to try cohabiting and they have been renting an apartment in Yau Tong since last year.

They even decided to adopt a 10-year-old collie named Coco.  When they first adopted Coco, he had a leg injury and Inez nursed him to health. Now that Coco has healed, Inez and Tony often take him out for walks and outdoor trips. As Coco is very close with Tony, Inez gets jealous at times but she is a also a big dog lover.

Until meeting, Tony had never considered marriage in his past relationships.  It seems that he has gone from player to family man, as he recently told the media that he wants to get married and have children. “I’m ready! I’m at the right age, and I want to become a father. My girlfriend likes children and small animals, so we are heading in that direction!”

Inez also shared that she is ready any time. She joked, “I don’t even need a house, but I need to work hard so that I can save up for my child’s education fund.”

It is said that Tony has already proposed to Inez, and she has accepted. However, they are waiting for the pandemic to be over before starting to plan their wedding. Tony had previously joked,“It wouldn’t be a bad idea to propose at the finish line of the marathon!” Despite their steady relationship and compatibility, the couple has not officially acknowledged any wedding plans yet.

[Breakup Files] Natalie Tong and Tony Hung Are Over