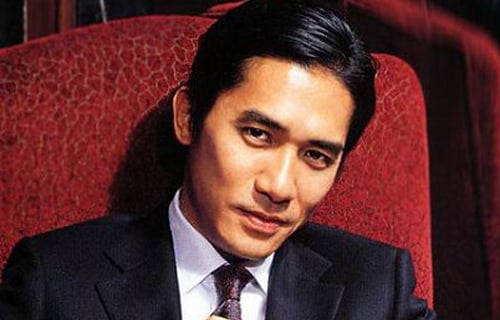 As a very private person, Tony Leung rarely appears on talk shows, but accepted good friend, Louisa’s invitation to show his support. During the interview, Tony spoke about his broken family while growing up and the regrets of not visiting his father for the last time before his death. He also discussed his relationship with  his wife, Carina Lau (劉嘉玲).

When he was ten years old, Tony’s parents got divorced. His mother took care of both Tony and his sister. Tony said, “Growing up in a single family made me stronger, mature and independent. I was basically the father in the family. I had to care for my sister and the household.” He believes his childhood made him into a person of independence.

Since his parent’s divorce, Tony had seen his father only a few times. His father felt like a stranger. Tony’s mother did not seem to be affected by the divorce. “Both of my parents never explained what happened between them because they thought we were too young to understand.”

Since Tony became an actor in the 1980s, he has not seen his father. “The last time I saw him, he felt like a complete stranger to me. I was angry at what he did to us, but now I have forgiven him.”

Tony said his father had passed away more than ten years ago. He regretted not seeing him for the last time. Tony lamented, “I treasure my mother and sister more because one regret is more than enough.”

With only praise towards his mother, Tony said, “She took care of us while working a full time job, day in and day out. Sometimes I feel uncomfortable talking to her since there wasn’t a lot of communication between us when I grew up. I love my mom and I am sure she knows that deep in her heart.” Tony said he spent less time with his mother early in his career, but since then he has tried very hard to be with her more often.”

Although Tony and Carina’s personalities may appear to be polar opposites, their relationship has lasted for two decades. Tony said Carina is a happy, straightforward person, and has a wild and crazy side. However, she can be mature and caring at the same time. Tony referred to Carina as the boss of the household. Tony said, “She also started working at a young age to support her family.  She is very organized, mature and independent like me. Carina handles everything for me, and there’s nothing for me to worry about. When I get home, I feel like I am there to enjoy my life.”

Tony and Carina costarred together in TVB series in the 1980s, but they did not start dating until performing in a theater play a decade later.  When asked how he had proposed to Carina, Tony said, “After many years of dating, I felt marriage was essential, especially for the woman. So when she brought up marriage, I happily agreed. On top of that, Carina took care of all the wedding details. That was pretty amazing.”