TVB Goddesses, Christine Kuo and Eliza Sam, Are Not Competitors 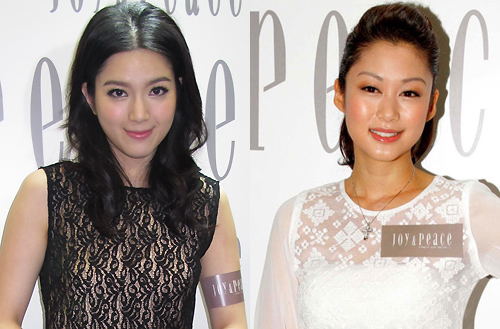 Although Christine possessed a beautiful face and curvaceous figure, her Cantonese was often regarded as her greatest weakness. After Eliza Sam shot to popularity in Divas in Distress <巴不得媽媽>, fans pointed out that Eliza’s Cantonese was better than Christine’s heavy accent. Christine said, “I do not think that her [Cantonese] is better than mine. We are both from overseas; it’s about the same.”

Happy for Eliza that she has ascended to “Goddess” status, Christine said that they were friends and will not regard her as a competitor nor replacement. Christine believed that she had her own position and the women possessed different personalities and styles.

Declining to comment what her strengths over Eliza were, Christine praised Eliza for her sweet smile. “She knows how to laugh. I hope I can be like her and think less and laugh more. She is simpler.” Asked if she felt she was more complex, Christine said, “Ha ha, I have lived in Hong Kong longer, which gave me a Hong Kong way of thinking and not as cheerful as before.”

Asked if Eliza felt that she had replaced former TVB Goddess, Christine’s place, she said, “Although I am not a man, I also feel that Christine Kuo is a goddess, ha ha!” Asked who she found to be more beautiful, Eliza said, “You cannot compare these things with other people!  I will not compare with myself.”

Recent tabloids claimed that Eliza had romantic sparks with Divas in Distress, Chin Ka Lok (錢嘉樂), arousing jealousy in his pregnant fiancee, Angela Tong (湯盈盈). Eliza dismissed the fabricated rumors, revealing that Angela had even called her and asked her to not worry about the reports.

Jayne: Indeed, Christine and Eliza give off very different vibes. Eliza’s outgoing personality may give her an added advantage in the long run, allowing her to develop better social relationships with wider range of people.

TVB can cultivate different “Goddesses” for every taste.

61 comments to TVB Goddesses, Christine Kuo and Eliza Sam, Are Not Competitors