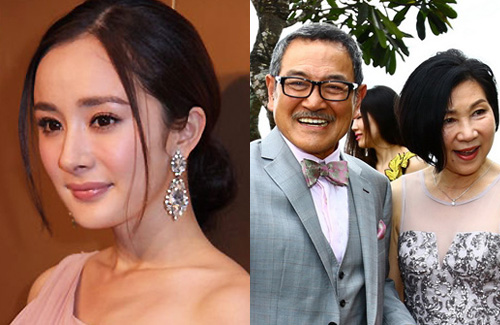 Although Yang Mi (楊冪) and Hawick Lau (劉愷威) became new parents last week, reports claim that not all is well within the Lau household. Choosing to give birth in Hong Kong, Yang Mi has been living with Hawick’s parents and has not been getting along with her in-laws. Lacking privacy and upset with the cramped apartment, Yang Mi already has plans to move into a newly purchased $60 million HKD, 3000-square-feet home in Kowloon Tong for her postpartum recovery period.

Hawick’s parents were photographed beaming while accompanying Yang Mi out of the hospital on June 5. Hawick’s father, TVB actor Lau Dan (劉丹), was extremely excited to become a grandfather, and welcomed Yang Mi into his three-bedroom home in Shatin during her last trimester of pregnancy. This made it easier for the Laus to prepare soup and ensure Yang Mi’s well-being.

An inside source disclosed that Yang Mi was dissatisfied with Lau Dan’s small home. In an earlier Weibo blog post, she hinted that she felt disrespected and bound. The source spilled, “Yang Mi has a high income and lived in a several thousand-square-feet mansion in Beijing. She is not used to suddenly having to live with so many people in a 1200 square-feet home. When she was pregnant, she stayed inside her own room and didn’t say much with her in-laws. It’s as if they don’t know each other!”

While they were dating, Hawick had purchased an apartment for Yang Mi in Hong Kong in 2012. However, Yang Mi felt that the air quality was poor in the surroundings and rented out the place. While she was pregnant, she started scouting for a new home in Hong Kong. The Lau family stopped Yang Mi from moving while she was pregnant, adhering to the Chinese belief that it may harm the unborn baby.

Lau Dan Admits There are Incompatibilities

Yet, one week into her postpartum confinement, Yang Mi reportedly decided to move out of her in-laws’ home. Lau Dan admitted that “there are cultural differences” since Yang Mi’s family is from northern China. Lau Dan said, “There are of course incompatibilities, but it’s fine now! It’s okay where they choose to live; I don’t mind.” However, Hawick’s daughter will attend school in Hong Kong and will be raised by her grandparents.

Asked to comment on the family situation, Hawick said, “Don’t believe the rumors! They’re false. We haven’t moved out and we didn’t rent out our other apartment.”