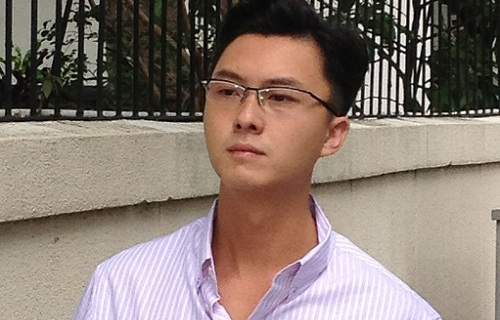 While filming TVB drama, Justice Attack <法網狙擊> in Kowloon Bay, Sammy Leung (森美) and Vincent Wong (王浩信) were required to act bravely and conduct a dangerous stunt. Sammy, who portrays a police officer has to save good friend, Vincent’s character after he jumps off a bridge. Both actors had to overcome their fears to professionally complete the performance.

Because the bridge is situated above a street, all safety precautions must be strictly adhered to.  In the scene, Sammy is to single-handedly grasp Vincent’s depressed character from mid-fall.  During the filming process, both actors had to jump over the bridge more than ten times until they were breathless and flushed. Furthermore, Sammy hurt his shoulders during the stunt.

Sammy disclosed of another incident where he needed to shout out his dialogue however, the vest of the harness was tied too tightly so he was not able to breath properly.  Fortunately, a crew member noticed and promptly pulled him in.

Sammy to Become the Next Best Actor

Thirty-eight-year- old Sammy Leung praised the cast and crew as hard workers.  They did not care how difficult the filming process was but strived for best results.  He had purposely went on a diet and lost ten pounds to accommodate for his character as a police officer.  Previously working as a DJ, Sammy said that filming the dangerous stunts have been the hardest for him since being in the entertainment industry.  He jokingly said that he hopes to win TVB’s Most Improved Actor Award this year and the Best Actor and Actress Awards next year!

New father, Vincent Wong honestly disclosed that he has acrophobia. After his performance as an Special Duties Unit officer in Tiger Cubs <飛虎>, he still felt that this is the most dangerous stunt he has yet performed.  To be in the best shape for the stunt, he slept more the night before filming.  Before leaving home, Vincent looked at his almost 3-month-old daughter intently and told her, “Daddy has to sheung lo (meaning death)  No! Just leaving!”