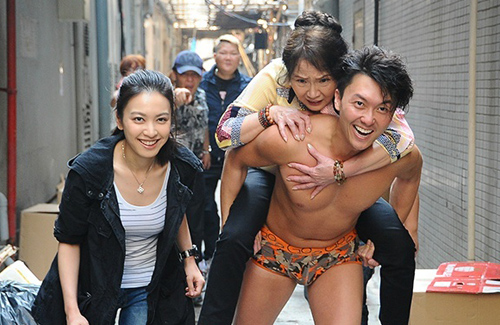 The cast was filming in a back alley, where Vincent was carrying Suet Nei (雪妮) on his back. In the scene, Vincent was saving his gambling addict mother, Suet Nei, and ended up losing everything except for a pair of underwear. Exposing his fit physique, Vincent appeared a bit flustered with the media and onlookers present.

Vincent admitted that he felt pressured clad in only his underwear. Due to sweating from all the filming, he did not wear an extra layer for protection under his underwear. Initially, he was only supposed to wear boxers, but producer Lam Chi Wah (林志華) insisted that if he stripped down to his briefs, it would make a stronger impact in the scene.

Vincent indicated that he did not work out for a fitter physique. Lam Chi Wah asked him to gain weight for the role. “This is the fattest I have gotten for filming.”

Tracy joked that if she wore a bikini for filming, it would still be more clothing than what Vincent had worn in the scene.