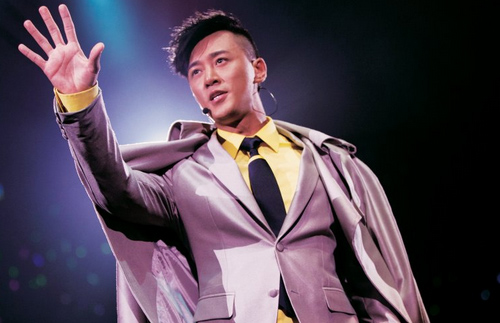 After Charles Chan became the new boss of TVB, Mona Fong (方逸华) stepped down from her former position as TVB Deputy Chairman and focused on strengthening her husband, Sir Run Run Shaw’s film company, Shaw Brothers Studios. Since Ms. Fong left TVB, it was frequently rumored that senior managers would follow. After Stephen Chan’s (陳志雲) resignation–who left to work  as CEO of Commercial Radio–Virginia Lok is rumored to have resigned from TVB and will leave in October.

Ms. Lok was personally recruited by Ms. Fong to join TVB to serve as Director of Production Resources, managing the careers of TVB artists over the last decade. Ms. Lok is largely credited in developing successful superstars such as Raymond Lam, Kevin Cheng, and Myolie Wu. Due to Ms. Lok’s influence in boosting their careers and commercial earnings, many artists have personally pledged their loyalty to Virginia Lok instead of TVB.

Last September, when CTI was heavily recruiting TVB artists to star in upcoming television dramas, Raymond Lam, Kevin Cheng, Bosco Wong, and Kate Tsui indicated that they will remain at TVB as long as Ms. Lok worked for the company. Raymond Lam said, “As long as Ms. Lok remains at TVB, I will stay as well!”

The artists’ statements raised a disturbing scenario: what would happen if Virginia Lok were to leave TVB one day?

As the senior management at TVB appeared to be in constant fluctuation, TVB was no longer regarded as the same company under the new ownership, especially among current employees. Many artists’ loyalties lie with the senior managers they established connections with for years, following them to pursue new career pursuits outside of the company.

According to leaked information from a TVB insider, Ms. Lok is already looking to mobilize her favorite artists, asking them to sign with the new management company  established by Shaw Brothers Studios. It was understood that Shaw Brothers set its sights to emulate the success of mainland entertainment empire, Huayi Brothers, by releasing major films and managing its own in-house artists.

TV King and Queen, Kevin Cheng and Myolie Wu’s TVB management contracts will expire at the end of 2013. Kevin and Myolie’s careers have soared in mainland China, allowing them to become quiet millionaires. While a mainland China company has already expressed interest to sign Myolie, her friendship with Ms. Lok may prompt her to follow her footsteps!

Other popular TVB fadans, Tavia Yeung (楊怡) and Linda Chung (鍾嘉欣), allegedly have more than 2 years remaining in their TVB management contracts. Thus, they are not currently on Ms. Lok’s immediate list of artists to recruit for Shaw Brothers.

Is Shaw Brothers An Ally or Competitor?

Despite its former partnership, TVB may soon lose its most commercially successful stars to Shaw Brothers. TVB majority owner, Charles Chan, is aware of the potential blow this may have on TVB. It is understood that while he hopes to have Ms. Lok remain at TVB, he is also looking to find a suitable replacement for her to oversee the Artist Management department.

With another management shakeup at TVB occurring, Charles Chan’s good friends, Eric Tsang (曾志偉) and Nat Chan (陳百祥), rose in ranks within the organization. Both Eric and Nat have become the “left and right arms” of Mr. Chan, hosting many major shows at TVB and advising on management issues.

With Shaw Brothers’ ambitious plans to expand their entertainment empire next year, the impending resignation of Virginia Lok, and the exodus of its biggest stars, TVB’s stronghold is threatened on many fronts. It may not require new rival station, CTI to even fire its first cannon shot before reverberations will be felt at TVB.

websites. No part of this article may be copied, reproduced, rearranged, redistributed, modified by any means or in any form whatsoever without prior written permission.  You may use the content online and for your non-commercial, personal use only. Copying these materials for anything other than your personal use is a violation of copyright laws.

Jayne: Logically, it makes a lot of sense for Ms. Lok to leave. After a transfer in corporate ownership, key management often leave to follow old loyalties or pursue new career interests. Since last September, Ms. Lok has been rumored to be leaving TVB.

The leaked “secrets” from TVB insiders have been quite accurate, including the entire Stephen Chan corruption scandal. Reflecting back, Mr. Chan’s case shows how fierce and cutthroat the competition within TVB senior management is. Mr. Chan’s career was set to be destroyed and I suspect deep rivalries continue to exist.

Given this environment and that Ms. Fong has many decades of friendship with Ms. Lok, I can understand Ms. Lok’s decision to leave. Ms. Lok will be given a  critical responsibility to spearhead the new management company.

Although I do wonder that when Shaw Brothers sold its 26% stake in TVB to Charles Chan, Ms. Fong must have signed some non-compete clause to not directly compete with TVB within a specified time frame. Thus, Shaw Brothers may set its sights on the more lucrative mainland China market, in which celebrities such as Cecilia Cheung have set up their own production companies. China is certainly big enough for Shaw Brothers to be interested! It was just a matter of time to mobilize the right people to do so.

What is your reaction towards the possibility that Raymond Lam, Kevin Cheng, and Myolie Wu will soon become ex-TVB artists?