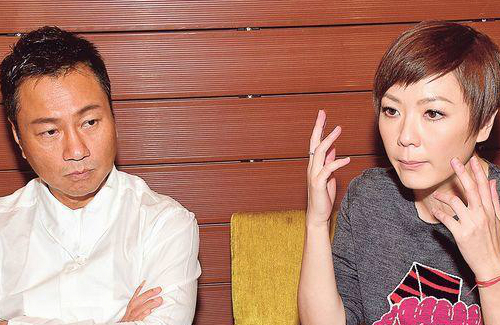 With the TVB Anniversary Awards coming up in approximately two months, the debate of who will receive this year’s TV King and Queen awards are generating much buzz. Under the Veil <無雙譜> costars Wayne Lai (黎耀祥) and Kristal Tin (田蕊妮), whom have both won the awards in previous years, support each other in receiving the top honours once again.

Wayne praised Kristal for being a professional costar. In fact, every time they collaborate, their discussions would somehow relate to their work. Wayne shared that Kristal is a very focused artiste who carries a responsible attitude towards her career. He expressed, “I’ve been at TVB for a decade and have never seen such a devoted actress. When she’s filming, all her thoughts revolve around the drama!”

When asked if Wayne is confident in taking home the Best Actor award for the fourth time, he exclaimed, “If you ask me that question, my answer is obviously yes! But receiving an award comes with many different factors. It doesn’t mean you’ve done well just because you won.” Wayne added that he truly enjoys his acting career, which is exciting with both its ups and downs.

Feeling blessed with what he has already achieved, Wayne stated humbly, “I’m not young anymore, and I carry a different attitude now. I don’t really think about grasping onto opportunities and branching into different markets. In just 10 or 20 years, I’ll be 70 years old. Do I still expect to be male lead by then? I’m already fulfilled with what I have at this moment.”

Kristal agreed with Wayne’s remark about how acting adds new experiences to their lives. She expressed that she enjoys chatting with Wayne, since she is not only able to polish her acting skills, but could also learn some wise life tips. In contrast to Wayne and his wife, who spend a lot of time together, Kristal is always away from her husband Chapman To (杜汶澤). However, she expressed that it is also beneficial, since distance makes the heart grow fonder.