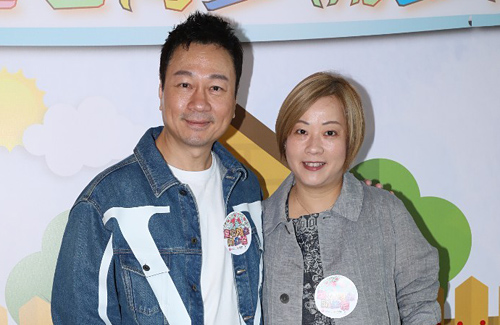 Wayne and his wife, Julia, have been married for 22 years.

Attending an event for a local radio station, Wayne Lai (黎耀祥) spoke about tips in educating young children and shared some personal updates about his real estate investments.

Pocketing a large profit after selling his home earlier, Wayne revealed, “My wife and I aren’t really knowledgeable when it comes down to investments. We bought this place for over a decade before finally selling it and earning several million (HKD). I have a feeling that the prices won’t always be going up, so I thought this was good time to sell it. Right now, it’s cheaper to rent than to buy, so I’m going to look carefully before buying again. Some of my friends told me that I should invest in properties overseas in Canada. Apparently, the return is very good and their housing market isn’t like the Hong Kong.”

Since Wayne’s son Lai Ching Kiu (黎正僑) is currently studying in the United States, the media wondered why Wayne didn’t purchase a property for him near his school. Although he did have initial thoughts about the idea and even thought about immigrating to the United States, Wayne said he quickly dropped the idea. All of his son’s friends are all in Hong Kong and he plans to move back for work after he graduates.