Continuing his string of action roles , Wayne Lai (黎耀祥) will be starring in TVB’s new drama, Boxing King <拳王>. Similar to his role in Death by Zero (殺手) where he portrays a fallen assassin, Wayne will star as a former top Muay Thai boxer who is now dated and irrelevant. He stars alongside Elaine Yiu (姚子羚), Owen Cheung (張振朗), and Winki Lai (賴慰玲). 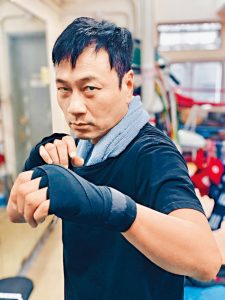 Although he only has a few scenes where he will be boxing, Wayne did not slack in the preparation department, as he trained with a Muay Thai instructor for several months prior to filming.

“While Death by Zero required more action scenes, the physical contacts while filming this drama is a lot rougher. Since there’s only a few scenes that require boxing though, it will not be as difficult filming this as it was for Death by Zero. However, because of my age, I have to start physical preparations earlier. Fortunately, I have always maintained a regular exercise routine and have some background in karate from my high school days. The Muay Thai instructor mainly taught me basic skills, punching from left to right, attacking with my legs, and footwork. His way of teaching was step-by-step and was very professional. I hope that the rhythm of my Muay Thai scenes will give a realistic perception.”

Known for his work ethic, Wayne always put in 100 percent into all of his projects. Due to the physical demands of his role in Death by Zero, Wayne previously suffered knee inflammation, which caused painful swelling. Despite this, Wayne is not backing away from action roles. “My mentality is if I accept the role, then I cannot be afraid to get hurt. If I do get hurt, then I’ll address it by seeing a doctor. If I were afraid to get hurt, then I wouldn’t be able to do anything well. It is because of this role and drama that I got the opportunity to learn Muay Thai. I am excited and looking forward to working with producer Andy Chan (陳耀全). “

Although Sheren Tang and Wayne Lai are recognized as best partners for their collaboration in “Rosy Business” and “No Regrets,” Wayne said that they didn’t talk much behind cameras.