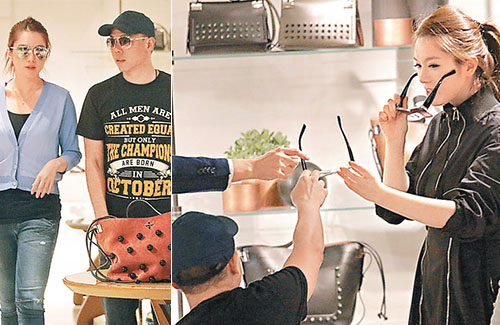 Christine Kuo’s (苟芸慧) relationship with auto racer William Lok (陸漢洋) is moving fast. Although it’s only been a few months since the good-looking couple confirmed their relationship, rumors are already spreading about their upcoming marriage.

Though the pair said they have no dates for a wedding yet, the news of their Italy trip in a few days is bringing wedding speculations back to the table—that William plans on proposing to Christine in Venice.

Last week, the couple were spotted shopping in Kowloon Tong. William patiently waited and offered his opinions to Christine as she tried on different outfits. Christine will be going to a show in Italy soon, while William would be going to Belgium for a race at around the same time. Rumors say that William has already booked a nice hotel suite in Venice, and plans on proposing to Christine in a romantic dinner.

When asked about his trip to Italy, William told reporters, “Christine is going to Italy for work, while I’ll be going to Belgium for a race. I’ll meet up with her in Italy afterwards.” After suggesting to William that he should propose to Christine in Venice, William said, “Good idea!” (So is it true?) “Not going to answer that!”

William himself said he doesn’t know when they would have time for a wedding. “There’s still no date yet. I know approximately how my schedule is going to look like, especially after the race, but her schedule is a little harder to make it work. It really is about timing. She wants to [hold the wedding] in Canada because her family is there, and also in Hong Kong. There are also other places I want to do it in. It’s kind of giving me a headache. I’m going to have to ask my friends for advice.”

Would next year be a good time to get married? “Hopefully!”