Following a published rant on WeChat by Mainland Chinese actress Ruby Chen (陈昱霖), who confessed to having a 7-year affair with Wu Xiubo (吴秀波), more reports of the famous actor’s scandalous affairs have now resurfaced, striking a blow on the 50 year old’s image.

A netizen dug up an old blind item written by famous gossip reporter Zhuo Wei (卓伟), who is now retired. In the article, Zhuo Wei revealed that a famous actor “Xu Litao” (which netizens have now decoded to mean Wu Xiubo) had a promiscuous dating past, in which his victims included an underaged girl. Zhuo Wei claimed that the women he dated become younger and younger through the years. The youngest girl he dated was 30 years his junior. At the time the report was published, Zhuo Wei named only three victims. 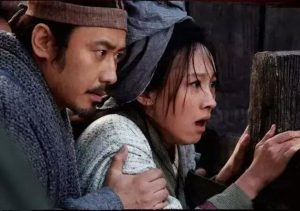 The first victim, nicknamed “Tang Xiaoling” (Underaged Tang) was the youngest of the three. The second victim was nicknamed “Song Huijing,” who had collaborated with Wu in a modern television drama. Song already had a boyfriend when she met Wu, and was allegedly sexually assaulted by Wu when he was drunk. The third victim was nicknamed “Chen Xiaoying,” who had starred in a popular time-travel television drama. Chen was over 20 years younger than Wu, and was also underaged when she met him. Wu had allegedly lured her into his hotel room with the pretense of acting rehearsals, and raped her. This incident nearly caused Chen to retire from the entertainment industry.

With all of this information in mind, netizens have managed to come up with a few guesses on the true identities of the three victims. “Chen Xiaoying” may have been the teen actress from the 2013 television drama Case of the Zhao Family Orphan <赵氏孤儿案>, which starred Wu. However, the child actress did not retire from the industry as claimed in Zhuo Wei’s post.