Above: After Wu Xiubo cheated on her, Ruby Chen revealed their sordid affair that lasted for 7 years while he was married.

Mainland actor Wu Xiubo (吳秀波), known for his roles in Finding Mr. Right <北京遇上西雅图> and The Advisors Alliance <大軍師司馬懿之軍師聯盟>, has been married since 2002 with two sons. Reports surfaced today that Xiubo has cheated many times in his marriage, and even had a seven-year long affair with his mistress. 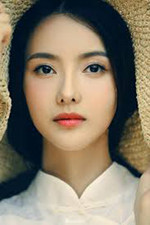 Mainland Chinese actress Ruby Chen (陳昱霖) posted on her WeChat friend circle lamenting about her seven-year affair with Xiubo. Besides revealing her own secret relationship with the 50-year-old actor, Ruby also exposed that Xiubo is involved with several other women at the same time, including actress Zhang Zhixi (張芷溪) with whom he worked on in The Advisors Alliance.

Ruby claimed that Zhixi has been bothering and harassing her during this time period, ultimately causing her depression. Upon hearing the accusations, Zhixi fought back on her Weibo blog, posting an annoyed message stating, “So much nonsense during the Mid-Autumn Festival. I give my blessings to the parties involved; don’t drag me into this. I know I’m innocent.”

Ruby revealed that she was supposed to have been part of the cast for The Advisors Alliance, but was advised by Xiubo about the poor filming conditions. So instead of filming, Ruby stayed with Xiubo in Hengdian for 333 days, cooking, cleaning, and looking after him after work. While she cared for him, Ruby claimed that he was cheating on her with his The Advisors Alliance co-star.

Xiubo’s many betrayals caused Ruby to hate him. She wrote, “Last year in May, when we went to Milan, do you remember [hitting] me? Since I ‘searched’ you, you went crazy and [hit] me. I realize at the time that you were guilty [of cheating on me]. I see through your selfishness and cold blood. I can’t but let go. In my next life, I refuse to forgive you. I’ll always hate you.”

Wu Xiubo Admits He Was Promiscuous

When the media tried to reach out to Xiubo and his management company, the actor’s representatives hung up the phone upon hearing the media’s questions, refusing to give any information regarding Ruby Chen’s claims.

However, digging up an interview Xiubo had in 2014, he had admitted his promiscuous nature at the time. Dating since he was 16 years old, Xiubo’s romantic life grew increasingly complicated by the time he was in his early adulthood.

Xiubo said he cannot say no to women who approached him, and that he “won’t take initiative, won’t refuse, and won’t be responsible.”

Singing at a bar in his early twenties, Xiubo admitted he had forgotten how many girlfriends he had, and could not differentiate which relationships were true love. He did not remember the pain or sadness from each relationship, because he felt these were only passing feelings which would eventually be forgotten over time.

Although succinct when speaking about his family, Xiubo said, “I don’t talk about my family. Simply because I’m an actor and not a writer writing an autobiography. If you must ask me, I will respond with a few words: Do I love my wife and children? Yes, I love them.”