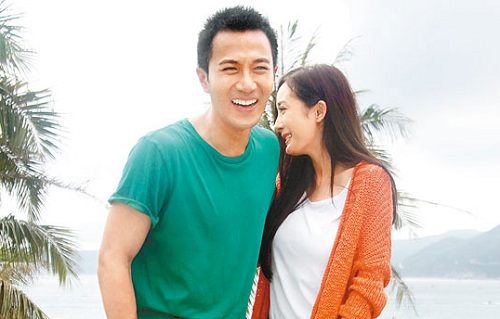 Since announcing their dating relationship in January, Yang Mi (楊冪) and Hawick Lau (劉愷威) received more money making opportunities to jointly appear in public appearances. The hot couple was welcomed by fans and grabbed the imagination of the media, who awarded Nicholas Tse (謝霆鋒) as a “third party” to spice up their relationship further! Will Yang Mi and Hawick Lau prove that they are a true power couple able to generate box office sales for their new movie, Hold Onto Love <Hold住愛>?

After their mainland drama, Ru Yi <如意>, audiences will have another chance to witness the sizzling chemistry between 37-year-old Hawick Lau and 25-year-old Yang Mi in Hold Onto Love. A rising star in mainland China, Hawick will have bed scenes with Chrissie Chau in the movie.

At the movie’s press conference, Director Zhang Qi (张琦) explained,  “In the initial casting, I did not know that Yang Mi and Hawick Lau were dating. Yang Mi was cast first. The lead actor was finalized as Hawick Lau, due to his stylish air. He resembles many aspects of the lead character, ‘Liu Kaiwei.’ After realizing that Yang Mi and Hawick were real-life lovers, I felt as if I had won the lottery!”

In Hold Onto Love, Hawick and Yang Mi portray ex-lovers, who find new love interests. After breaking up, Hawick and Yang Mi discover that they had won a big prize: a couples’ vacation package to Sanya, Hainan! Arriving on the island, unexpected incidents occur in their relationship.

Without revealing too many plot details, producer Li Jinwen (李錦文) described Hold Onto Love as a “honeymoon travelogue,” filming in Sanya, Jianfengling Yanoda.  Director Zhang Qi said that it was not simply a love movie, but explored how people love each other, with controversial elements.

Onscreen, Chrissie Chau will portray the sexy “third party” in Yang Mi and Hawick Lau’s relationship in Hold Onto Love. Asked how Chrissie felt about this, she laughed, “It’s an eye sore,” towards the loving couple’s behavior. The director also revealed that Hawick was so immersed in his dating scenes with Yang Mi, that Hawick continued to hold onto Yang Mi’s hand after the cameras were turned off.

Appearing with Yang Mi in a movie together for the first time, Hawick admitted that he felt nervous. “In the beginning, I was a little worried. I was afraid that we will be unable to bite back our laughter during filming! This feeling disappeared afterward, in which I discovered that we had greater understanding in our work together.”

Yang Mi allegedly had knocked on Nicholas Tse’ hotel room door during the filming of Ghost Bullets <消失的子彈>, an incident which Nicholas denied had occurred. In a joint interview with Oriental Daily, Hawick laughed over the rumors that linked Yang Mi to Nicholas. Hawick expressed the importance of proper communication between lovers, a skill which many relationships lacked. Hawick said, “Everyone knows that she (Yang Mi) is a popular actress, which makes it easy to attract such unexpected rumors!”

Hawick  did not question Yang Mi about her rumors with Nicholas. Hawick said surely, “I If I were to ask, then that means I have no confidence in myself! We rarely argue,” Hawick said that the couple would maximize on their time spent together.

Asked about marriage intentions, Hawick said, “We are focused on having fun together in our dating relationship right now.” Asked whether Yang Mi had many suitors, Hawick joked, “There is no need to worry. I have a lot of pursuers too!” The couple smiled at each other and appeared to be passionately in love.

In his Weibo blog earlier, Hawick had indicated that Yang Mi was an insecure woman. Admitting their relationship publicly apparently boosted her confidence in their dating relationship. While filming in rural settings earlier, Yang Mi came across snakes, rodents, and bugs, in which she complained on a daily basis to Hawick. He professed that his heart felt her discomfort and worried about her. Yang Mi laughed when Hawick recounted the experience at the press conference yesterday.

Jayne: Hawick and Yang Mi appear to be a very popular young couple in China. Hawick will produce a mainland drama for the first time this year, in which they will portray lovers once again. That will be 3 filming projects together over the last 3 years! I do like this couple…hope they will last.

He seems giddly in love with Yang Mi, who is more reserved in video interviews and harder to read.