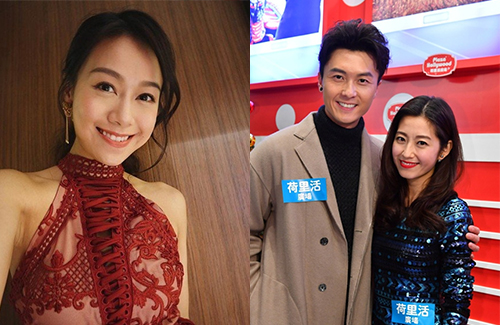 Though the TVB actress did not explicitly state who or what she was referring to, it is speculated that her post was in response to the Jacqueline Wong (黃心穎) cheating scandal that is currently overturning the Hong Kong entertainment industry.

Yoyo wrote, “People should move forward in life, but ‘looking back’ is also a kind of wisdom. We should all have the ability to constantly reflect on our past. As we look back, we get to see where we started, where we made faults, where we learned our lessons, and where we felt happiness from our successes. Looking back is a chance for us to sort out our experiences, check the way we conduct ourselves, and use that to pave the way for us to walk a road that is clearer, more wholesome, and further!”

During the production of the 2015 TVB drama With or Without You <東波家事>, there were rumors that Jacqueline was cozying up with her costar Vincent Wong (王浩信), Yoyo’s husband. All three involved persons denied the rumor, with Vincent explaining that the rumor had probably stemmed from a misunderstanding, as they played a couple on the show.

But Jacqueline’s recent cheating scandal did nothing but bring back old speculations and escalating them.

Yoyo started dating Vincent soon after the two collaborated in 2008’s Wars of In-Laws II <野蠻奶奶大戰戈師奶>. After three years of dating, the couple got married and welcomed a daughter in 2011.

With Vincent’s recent rise in popularity, as well as his old rumored involvement with Jacqueline, divorce speculations are back to plague the couple. Yoyo, however, denies the separation, insisting that many reports about them were false.