Although Zanilia Zhao (趙麗穎) and William Feng (馮紹峰) never openly admitted to dating, they have been spotted going on dates numerous times. Recently, it is reported that their relationship will move onto the next stage, and may finally tie the knot in Europe by the end of the year. 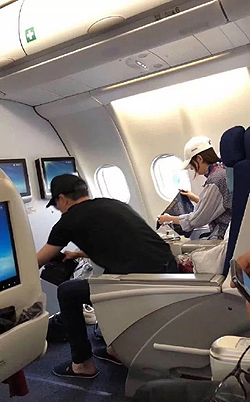 Earlier this week, the two were spotted were together on a flight to Shenzhen in matching black face masks. Despite dressing down, Zanilia and William were immediately recognized by fans.

The couple was again spotted shopping together in Hong Kong. Taking photos in the background, fans uploaded the pictures onto their blogs and wrote, “I bumped into Zanilia while shopping – she’s very pretty in person. There’s also a male beside Zanilia, but he went to look at the men’s clothing after a while. It was William – you guys should know this.”

Despite dressing casually outside of work-related functions, Zanilia still prefers to wear a full face of makeup. Mentioning in an interview that she is afraid to go out publicly without makeup, Zanilia’s honest answer was praised by fans.

A fan who bumped into the 30-year-old actress when she was off commented, “I saw Zanilia in Xian last year. Her skin was very pale – she’s very tall and thin. Also, her skin is not particularly good, and it’s evident that she has crow’s feet around her eyes. The foundation was a bit heavy and she had full makeup on. It goes to show that Zanilia is not a young little actress.”