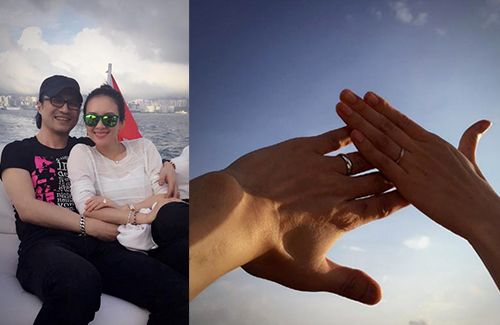 “Our anniversary, last year today. Thankful that I have you, have love, have faith, have Xingxing, and big presents!” wrote Ziyi.

Ziyi and Wang Feng spent a part of their anniversary enjoying the privacy in their yacht. Looking happy and in bliss, Ziyi did not forget to show fans the wedding ring she had been wearing. In another photo Ziyi shared, she showed off the red roses that Wang Feng had given her. Many netizens and fans congratulated Ziyi and Wang Feng on their memorable day, wishing them happiness.

Though they’ve been rumored for a while, Wang Feng officially confirmed their relationship in November 2013 during a concert. In June 2014, Ziyi opened up about her romance with Wang Feng for the first time and shared a picture of her birthday cake for Wang Feng. In February 2015, it was revealed that Ziyi had accepted his marriage proposal. Ziyi gave birth to their daughter, Xingxing, on December 27, 2015.