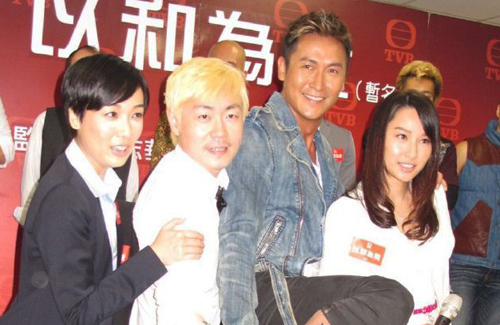 TVB’s new comedy drama Harmony is a Virtue <以和為貴> held is costume fitting press conference on August 26. It features Joe Ma (馬德鐘), Kate Tsui (徐子珊), and Johnson Lee (李思捷) in the lead and is slated to run for 20 episodes.

Joe Ma portrays a second generation gangster, whose father is the leader of a triad. He is humorous, witty, and does not take his job as a gangster seriously. At the press conference, Joe took off his jacket to show off his tattoos, causing Kate Tsui to break into laughter.

Kate said her character will have a lot of romantic tension. She is married to Stefan Wong (黃長興), but her husband fools around often and has a mistress (Carat Cheung 張名雅). Joe Ma comes in between her and Stefan, leading Kate to divorce Stefan. Kate anticipates filming the comedy, as it has been a few years since she last worked with Joe.

Johnson Lee portrays a competitive lawyer who changes girlfriends left and right. In the series, he will be pursuing Jacqueline Wong (黃心穎) and Elena Kong (江美儀). Kate said Johnson has very charismatic eyes and expects him to have a lot of chemistry with the women. “I will try to avoid his eyes during filming,” Kate said with a laugh.

Harmony is a Virtue will be Joe’s last drama with TVB according to his contract. He intends to sign a new contract and will continue to work with TVB in the future.

Joe will also try to maintain both a career in Hong Kong and mainland China, “I’ve been in talks to star in [mainland] dramas. I want to try new things. However, I also miss the Hong Kong audience, so I’ll balance both sides.” 37 comments to Joe Ma, Kate Tsui, and Johnson Lee at “Harmony is a Virtue” Costume Fitting