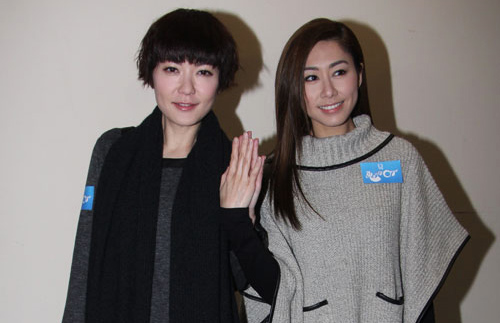 Nancy complained that the series was cursed because the cold weather hit as soon as Ghost of Relativity was scheduled to start filming. Unable to handle the sudden changes in temperature, Nancy fell sick since the filming commenced and eventually passed on her germs to the rest of her co-stars.

Unfortunately for Kristal, she was the first person to fall sick because of Nancy. During the outdoor scenes, Kristal was unable to stick heat patches under her shirt because the fabric was too transparent. Kristal said Nancy was the culprit responsible for their sniffling noses. Nancy joked, “The germs are too intense. After Kristal got sick, I had to stay far away.”

Besides Kristal, many of the cast and staff members also fell ill when filming Ghost of Relativity. Kristal revealed that she and Nancy originally had a kiss scene with lead male star Moses Chan (陳豪) but had to forfeit the scene partially because of their colds.

Kristal disclosed, “I told everyone that if they didn’t need me, don’t come into our part of the studio. Nancy is patient zero – she came in looking as swollen as a pig one day. We were supposed to kiss Moses that night but he has a family and his wife is pregnant. In the end, Nancy didn’t kiss him either but everyone else still caught [the cold] and they suffered symptoms similar to Nancy. Our studio has accumulated a lot of germs.”