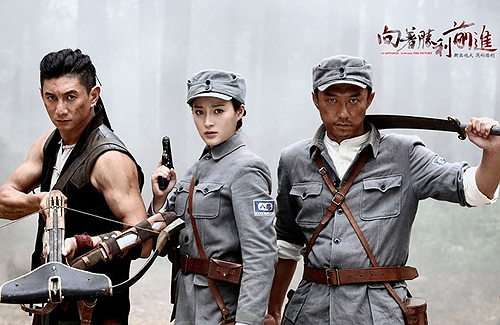 Television drama To Advance Toward the Victory <向著勝利前進> will begin airing on August 31, starring Nicky Wu (吳奇隆) as a hunter who becomes involved in the Second Sino-Japanese War. However, both this series and its companion drama, To Advance Toward Gunfire <向著炮火前進>, which aired in 2012, have come under fire for unrealistic scenes and stylistic inaccuracies.

In To Advance Toward the Victory, Nicky portrays a rugged and intelligent hunter named Zhan Lang (literally, “War Wolf”). He is particularly skilled at using cold weapons and also possesses the brains to plan conspiracies. However, he has one fatal weak point: in his forehead lie the remains of a Japanese bullet.

Zhan Lang’s appearance befits that of a hunter who often deals with wild animals in the jungle: he has long braids, wears leather clothing, and looks muscular but filthy. Nevertheless, netizens have claimed that this appearance does not match the style of the time, a criticism they also leveled against To Advance Toward Gunfire. In response, Nicky said that he hopes his appearance will reveal Zhan Lang’s wild quality and added, “Every age has a similar style. The directors have researched it.”

According to director Lin Jianzhong (林建中), the drama’s original concept was to combine stylish actors like Nicky and female lead Gan Tingting (甘婷婷) with realistic packaging. “The storyline and scenes are extremely realistic, even a little cruel,” Lin remarked. “We hope that this way, it will stand out from other war dramas.”

To Advance Toward Gunfire received criticism for one scene in particular: when Nicky’s character bursts out with a submachine gun and walks away completely uninjured. Netizens called the scene unrealistic, to which Nicky replied, “It’s okay to add a bit more entertainment and theatricality to a limited extent. The actors go through much trouble to film it, yet the viewers are concerned only with what’s realistic and what isn’t. That’s not fair to the hardworking actors. What’s more, what Hollywood lead doesn’t run freely amid a hail of bullets? They even use missiles, aliens, and robots. To me, as long as the details aren’t too preposterous, it’s okay.”

In To Advance Toward the Victory, Nicky collaborated with Gan Tingting for the second time. The two clearly got along well on set, and Nicky was very considerate, especially when they had to film a diving scene. Since Tingting cannot swim, she was extremely frightened about diving into a four-meter-deep section of water. To assuage her nerves, Nicky made funny faces at her and told her, “Don’t be afraid. I’m a diving instructor. Jump with me, don’t worry.” After they finished filming that day, he made sure to send her a comforting message on WeChat.

Since it was recently rumored that Nicky is going out with his Bu Bu Jing Xin <步步驚心> costar Cecilia Liu (劉詩詩), reporters rushed to ask him who his “true love” is: Cecilia, Gan Tingting, or his The Bride with White Hair <新白髮魔女傳> costar Ma Su (馬蘇)? Nicky successfully dodged the question by responding, “All of them are able to bear hardships and are very brave and outstanding actresses who are dedicated to their work.”

“To Advance Toward the Victory” Extended Trailer