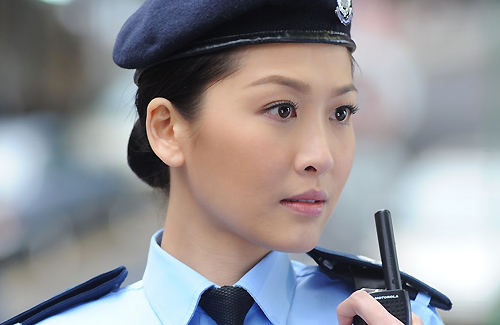 It came as a surprise when TVB decided to first release the high-budget Sergeant Tabloid <女警愛作戰> overseas before airing it in Hong Kong. Starring Niki Chow (周麗淇) in her first role as a police officer and Michael Tse (謝天華) as Niki’s unconventional partner in crime, the romantic comedy cop drama generated much publicity in Hong Kong during its first few months of production. Niki and Michael’s refreshing pairing, as well as the serial’s exhilarating new take on femininity and policewomen, made the serial into one of the most anticipated TVB dramas of 2012.

Sergeant Tabloid’s positive overseas reception just gave TVB more of a reason to air it in Hong Kong. Impressed by its positive reception from overseas audiences, producer Nelson Cheung (張乾文) announced last summer that not only will the serial get a release in Hong Kong, TVB will also be looking into developing a sequel if Sergeant Tabloid becomes a commercial success in the region.

Producer Cheung stated, “The new scenes are filmed according to the response from our overseas audiences. Everything will be re-edited, and previous deleted scenes will be added.”

Niki Chow and Michael Tse were invited to record the drama’s theme song, “The Center Point” <中心點>, which will be included in its opening theme video. Overseas versions of Sergeant Tabloid only had an opening credit video with theme music. Sergeant Tabloid tells the story of Lui Fei Hap (Niki Chow), a sergeant from the Emergency Unit of the Hong Kong Police Force. Already in her thirties and having gone through numerous empty love relationships in the past, she was positive that her current boyfriend, Tung Siu Leung (guest star Vincent Wong 王浩信) will be the one for her. But she is let down in love once again after discovering that her perfect man turned out to be a wanted drug baron.

A1 (Michael Tse), a highly competitive and ambitious tabloid reporter, decides to publish her unfortunate story, angering Fei Hap. They cross paths in the most unexpected ways, and though the two regard each other as mortal enemies, there is no denying that the unlikely duo has chemistry whenever they are together.

Fei Hap is reluctant to start a new relationship with her subordinate, the handsome and much younger Prince (Matthew Ko 高鈞賢). Little does she expect that her unyielding new superior, Madam Kill (Mandy Wong 黃智雯), also has an interest in him.

Incorporated with a comedic twist, the 25-episode cop drama will cover many major criminal cases. Some of the positively-received side plots among the show are A1 and Fei Hap’s undercover work in a male prostitution den and a haunted apartment mystery.

The new Hong Kong version also includes an explosive episode that will feature guest stars Evergreen Mak (麥長青) and Macy Chan (陳美詩). Portraying a pair of drug traffickers, the couple wreaks havoc in the city, sending the Hong Kong Police Force into a confusing frenzy. Evergreen and Macy’s episode will be exclusive to the Hong Kong broadcast.