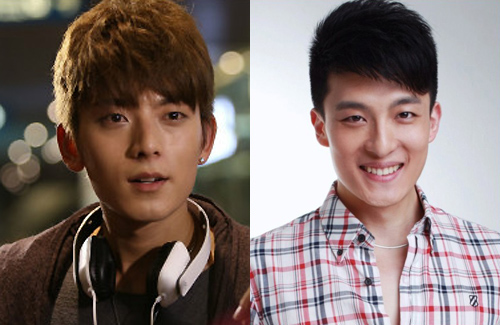 Above: Sean Chen and Sun Yizhou are rumored to have joined the cast of “Bu Bu Jing Qing”.

News about Bu Bu Jing Qing <步步驚情>, the modern-era reboot of the popular time-traveling drama Bu Bu Jing Xin <步步驚心>, has been relatively low-key, but the enthusiasm of fans has not been dampened in the slightest. On March 2, when filming began in Tianjin, a crew member posted a photograph of the set. Although many of the people in the picture were facing their backs to the camera, sharp-eyed netizens immediately spotted mainland Chinese actor Sun Yizhou (孫藝洲) and singer/actor Sean Chen (陳翔), leading fans to speculate whether they would be joining the cast.

It was previously rumored that Sun Yizhou, who rose to popularity in the iPartment <愛情公寓> series, would be playing the second male lead, Kang Sihan, who vies with “Fourth prince” Yin Zheng (Nicky Wu 吳奇隆) for the affections of female lead Zhang Xiao (Cecilia Liu 劉詩詩). His appearance on set seems to have confirmed this rumor, although Sun Yizhou declined interviews regarding his exact role in Bu Bu Jing Qing.

A netizen also recently revealed a photo of Cecilia Liu and Sean Chen filming a scene together, stating that Sean would play the role of her ex-boyfriend. Sean placed fifth overall in the 2010 Super Boys <快樂男聲>, a national singing contest broadcast on Hunan Satellite Television, the TV station that aired Bu Bu Jing Xin in 2011. In the past two years, Sean has garnered success and approval not only for his music, but also for his appearances in movies and dramas. Although his role in Bu Bu Jing Qing will likely be very minor, fans are still excited at the possibility. His manager, however, said she had not heard the news that he would be participating in the drama.

Production company Tangren has chosen not to reveal the cast list until it has been finalized, but there have been rumors that mainland Chinese actor Jiang Jingfu (蔣勁夫), known for his role in Xuan Yuan Sword 3: Scar in the Sky <軒轅劍之天之痕>, will play Sun Yizhou’s younger brother, Kang Siyu. Mainland Chinese singer Yico Zeng (曾軼可), a participant in the Super Girls <超級女聲> singing competition in 2009, may join the team as well. Nevertheless, she was not seen in the set photo, and her manager said she was uncertain about the details.