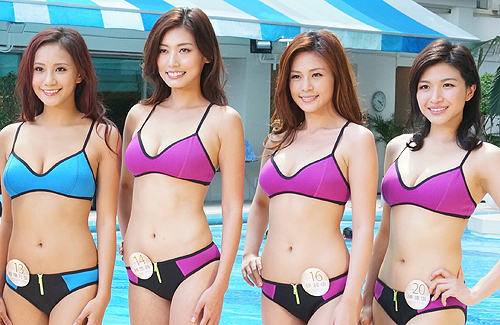 The final competition date for the Miss Hong Kong 2013 is drawing near and while everyone is busy preparing for this big day, the participants appeared in their sports swimwear today.

Although both Ashley and Acca were both extremely thin, they possessed slim waists and showcased their proud upper bodies. During the shoot, the public noticed that Vicky, who denied that she was a bisexual, bared a slight resemblance to previous Miss Hong Kong 2006 Aimee Chan (陳茵媺) because of her lovely smile.

While these 7 contestants stood out in confidence with their toned bodies, hot favorite Virginia Lau (劉溫馨) has been dropping in wattage lately. Initially deemed as a favorite to win the crown, other contestants were being featured more in the media lately.