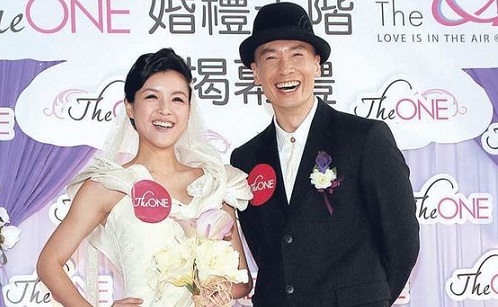 Turning 31 years old on April 1st, Aimee Chan (陈茵媺) reportedly received a huge surprise from boyfriend, 40-year-old Moses Chan (陈豪)! Tabloids claimed that Moses had proposed to Aimee and the pair may get married in December 2012! While she admitted that she was very happy dating Moses, Aimee stated that she currently possessed no urges to get married.

Since Moses and Aimee’s romance first emerged in March 2011, the development of their relationship has been closely scrutinized. For several months afterward, the pair were demure before the press, professing that they had good impressions of each other but did not officially date yet. However,  the couple were photographed cohabiting together last September. During the Lunar New Year holiday, Aimee visited Moses’ mother to pay respects. When Aimee’s younger brother visited Hong Kong earlier, Moses took time to take him to local attractions.

Moses and Aimee’s relationship progressed smoothly and they apparently received their family’s blessings as well. An insider revealed, “Moses has had enough ‘fun’ and wished to start a family. Earlier, Moses’ mother did not like Bernice Liu (廖碧儿) too much. She did not possess the intention to get settled down and marriage was not in sight! Aimee Chan was different. Moses’ mother had a very good impression towards her. Although Aimee’s parents have not met Moses yet, they have already praised him for being a good man.”

On March 31st, Aimee took one day off from filming TVB drama, The Confidant <大太监>, in Hengdian to return to Hong Kong. Aimee was eager to celebrate her birthday with Moses, who allegedly prepared a lavish meal of French cuisine and red wine for her. Tabloids claimed that Moses bestowed a Cartier ring upon Aimee, begging her to marry him!

When asked about the details of her birthday celebration with Moses, Aimee responded, “I will not tell you! Anyhow, I was very happy!” Regarding rumors that Moses had prepared a lavish meal and proposed to her, Aimee clarified that it was a misunderstanding. “It’s not like that! The photo was taken in Hengidan, when I was enjoying some red wine. I wanted to share the photo with everyone! Who knew that the tabloids would fabricate such a story!”

Aimee also clarified that she did not possess any current urges to get married immediately. “I only have urges to film better dramas. I have a lot of passion in acting!” When Aimee was teased that her words will greatly disappoint Moses, she responded, “I’ll take it slow! Currently, I am very happy!”

After filming The Confidant, Aimee will appear in a new TVB drama opposite Ruco Chan (陈展鹏) and Selena Li (李诗韵). In producer Leung Choi Yuen’s (梁材远) new series, Aimee will portray a director. Aimee’s new series with Moses, Psychological Warfare <心戰>, will be broadcast in Hong Kong in May 2012.

Jayne: Aimee’s career is off to a good start in 2012, as she is given many chances by TVB. Wedding bells may be a bit soon, but hope that they remain a happy couple.