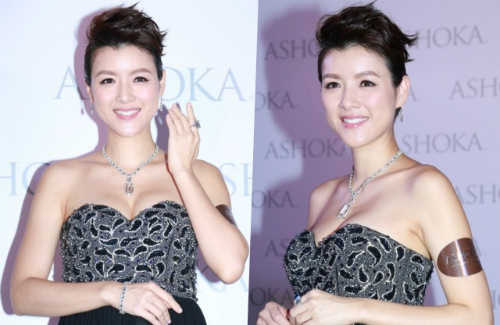 At a jewelry promotional function in Elements mall today, Aimee Chan (陳茵媺) cheerfully announced to the public that she is currently carrying her third child. Pregnant for three and a half months, it is still unclear whether or not the child is a boy or a girl. Aimee smiled happily and gushed, “Having three is enough now!”

In a black strapless dress and a pair of 5-inch high heels, the 34-year-old artiste exhibited a glowing complexion at the event. When asked if she is worried about tripping, Aimee shared that she is used to wearing high heels and would be extremely careful. Her third pregnancy did not happen by accident, as she and husband Moses Chan (陳豪) had always planned to have three children.

When asked if Moses showered Aimee with expensive gifts, she laughed and replied, “He gave me two sons already! They’re already the most precious gifts. The next big gift is our third child, which I already have! It doesn’t matter if it’s a boy or girl. The most important thing is that the baby is healthy. Moses and I both want a large family, because our house will be very lively!”

Aimee and Moses’ eldest son is almost 2 years old, while their younger son is 8 months old. Aimee shared, “I’ve been quite tired taking care of my two sons while being pregnant, but I still prefer to look after them on my own. It makes me feel very warm and happy. Having three children is really enough though, because it’ll be too tedious! I still want to return to acting in the future.”

In an interview with Moses, he expressed he is extremely happy to become a father again. “Three is enough! Even if we do end up having a fourth child, it won’t be in a long while. I hope Aimee would have time to do what she wants. She also has her own dreams! Since my dreams are already fulfilled, it’s time to fulfill hers.” Moses added, “Although I would like a daughter this time, I have to be fair. I don’t mind if it’s another boy!”

18 comments to Aimee Chan is Pregnant With Third Child