Andy Hui No Longer in Contact with Jacqueline Wong 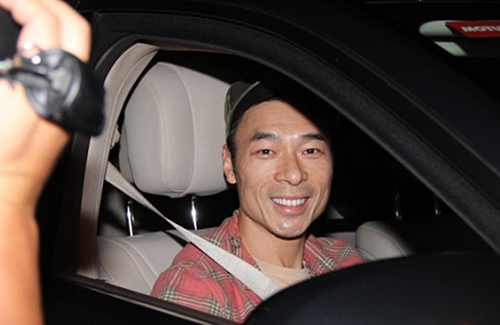 After his cheating scandal with Jacqueline Wong, it has been more than two months since Andy Hui made a public appearance.

Disappearing from the public eye for 72 days since his scandal with former Miss Hong Kong runner-up and TVB actress Jacqueline Wong (黃心穎), Andy Hui (許志安) was spotted by the press driving his car out alone. Flashing a grin at reporters, he has visibly lost weight since his last appearance, and was dressed in what appeared to be the same checkered top Andy wore when secretly filmed inside the taxi fondling Jacqueline.

On June 29 around 3:30 pm, Andy drove from Repulse Bay Beach to Yuen Long, where a male companion hopped into his car. The two then drove into town until past 10 p.m. when Andy finally left. When reporters went forward to interview him, Andy looked slightly embarrassed at being spotted, but  rolled down his car windows.

When asked if he was feeling better, he replied, “A lot better.” Reporters then asked if he had gone to the gym with his wife Sammi Cheng (鄭秀文), he nodded. As to whether he would go to Sammi’s upcoming concert, he replied, “I don’t know yet.” Andy said he had headed out for a chat with his friends today, and told reporters, “I hope to face myself bravely.”

Although Andy was smiling throughout and made no attempt to hide questions from reporters, his actions appeared awkward. He shook his head and replied, “Didn’t lah!” when asked if he had contacted Jacqueline. He also added, “I want to be a better version of myself and face myself.”

At around 10:45 p.m., Andy drove back to his home and parked his car, waving goodbye smilingly when reporters wished him a speedy “recovery”.

Since the scandal which shook the entire Hong Kong, Sammi was widely perceived to have forgiven her husband based on her statements on social media, although many remain curious about the couple’s current relationship. Actively preparing for her upcoming concert, Sammi had recently posted a video of herself working out at the gym, and sharp-eyed netizens spotted Andy’s reflection in the background.