Catherine Hung (洪欣) and Andy Zhang‘s (張丹峰) and nine-year marriage received a major red-flag lately. Tabloids claim that the 37-year-old actor has been cheating on his 47-year-old wife with his manager, Bi Ying (畢瀅).

From the start, many fans were not keen on Andy and Catherine’s relationship. Ten years older than Andy, Catherine was previously married and then dated Max Mok (莫少聰), with whom she has a teenage son. She was also a much more successful actress when she first started dating Andy. However, Andy became both a loving husband and a caring father for his stepson and own daughter.

Andy is now being labelled a cheater after Catherine uploaded a family photo onto her Weibo blog. Besides Catherine’s direct family member, Andy’s manager Bi Ying was also present in the photo, but she was seen leaning into Andy while holding the hand of the couple’s daughter. Almost immediately, netizens began commenting on how the three of them looked more like a family instead, stating that Bi Ying’s relationship with Andy is highly unusual. Based on a photo and personal perception, fans began sending Catherine messages, telling her to be careful of Bi Ying.

Almost immediately after Catherine’s photo was posted, netizens went through all of Bi Ying’s past Weibo posts, hoping to uncover more hints of her being the third-party. Netizens soon found a photo of Bi Ying and Andy wearing matching couple watches. Netizens also pointed out that the two were often seen wearing matching items as well, including one time where they wore matching rings. In the majority of the photos, Bi Ying was also seen standing or posing next to Andy as opposed to Catherine. Netizens uncovered a post with a receipt totaling 520 RMB, claiming that the post was a secret love message to Andy as 520 in Mandarin sounds like I Love You.

Coming to her own defense, Bi Ying stressed that she was having dinner with the couple and only posted the photo of the receipt because she thought it was interesting that the total was 520 RMB and that Andy’s Weibo following count was at 5.2 million.

In terms of the matching couple rings, Bi Ying explained, “I’ve had this ring for many years now. The one Andy has was gifted from Catherine. The brands and looks of the two are not even the same.”

When asked about owning a watch that looked like Andy’s, Bi Ying said she usually keeps Andy’s belongings on her when he has to work, and most assistants or employees would personally wear the items so that the valuables do not end up getting scratched. She also expressed that she was only holding the hand of Catherine’s daughter because she cared for her, and that all photos of her standing next to Andy were nothing more than coincidences.

As the cheating rumors went viral, Andy finally issued a statement today. Shooting the rumors down as false, he promised to take legal action towards the damaging claims.

Andy said, “My family and are are very happy as before. My manager and I have worked together for a long time. False news and concern, we know in our hearts. Grateful…thank you everyone.”

Catherine also responded on Weibo and fully supported her husband. 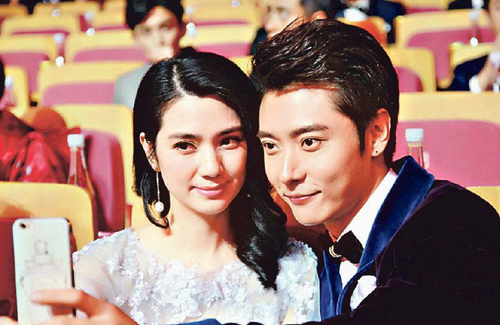