Bosco Wong: “Myolie Wu Better Invite Me To Her Wedding!” 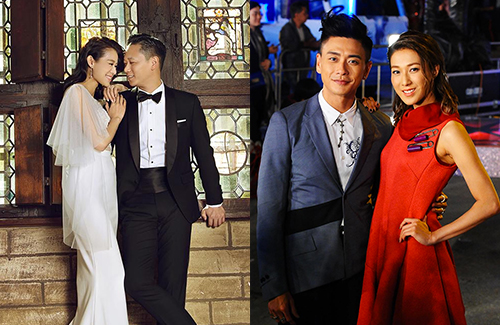 Myolie Wu (胡杏兒) announced on her 36th birthday, November 6, that she will be marrying her boyfriend of over one year, Philip Lee, next month. The couple are looking about having 50 tables for their wedding banquet, which will be held at The Ritz-Carlton, Hong Kong hotel on December 28. The former TVB actress also said that she has already saved a spot for ex-boyfriend, Bosco Wong (黃宗澤), to attend.

On November 10, Bosco made an appearance at the 2016 TVB Sales Presentation event to promote his upcoming drama K9 Cop <警犬巴打!!!> with costar Linda Chung (鍾嘉欣). While chatting with the press, the reporters asked Bosco if he thinks Myolie would invite him to her upcoming wedding.

“She better invite me!” said Bosco. “I didn’t go to her birthday party last week, but I did send her a message and wished her happy birthday. If I was in Hong Kong at the time, I would’ve gone.”

Some “Boscolie” shippers online suggested that Bosco should snatch Myolie away on her big wedding day. Bosco laughed, “This is real life, not The Bund <上海灘>! I am not Hui Man-keung!”

A reporter then asked Bosco if he feels sour about going to his ex’s wedding. Bosco wittily replied, “Do I feel sour? It really depends on what’s on the menu that night. If they’re going to serve sweet and sour ribs, then yeah, of course!” Linda laughed and said, “What a great a response!”

Bosco’s costar Linda is said to be one of the more prolific stars next year, as she currently has three dramas awaiting for release. Linda expressed, “I wouldn’t consider it as three because I only have a few scenes in Brother’s Keeper II <巨輪II>! But having two isn’t exactly too much. It’s an okay amount.”

Starring in three dramas, does Linda think that she has a higher chance to win TV Queen next year? “I honestly never thought about it. I am just enjoying work and doing my duty.”

12 comments to Bosco Wong: “Myolie Wu Better Invite Me To Her Wedding!”