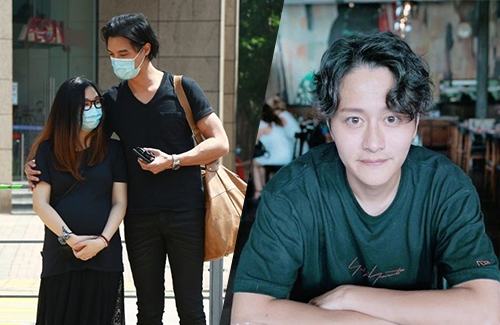 The Hong Kong entertainment industry has been rattled with the cheating scandal involving Zombie <食腦喪B> costars, Jackson Lai (黎振燁) and Ashley Chu (朱智賢). The former is married with a baby on the way, and the latter has been dating Brian Tse (謝東閔) for three years.

On April 29th, Ashley held a press conference to formally apologize to all those involved. Brian was also present to support Ashley. Brian held onto Ashley’s hand as she cried.

According to rumors, Ashley and Brian’s relationship was already reaching an end before the scandal even happened. The two had also been living together for some time. As they were already at the brink of splitting, Ashley fell hard for Jackson, who played her boyfriend in Zombie. After the scandal, Ashley immediately apologized to Brian in tears. It was said that Brian couldn’t bear the person he had loved fall into misery, and decided to not split with Ashley at this time.

Yesterday, Jackson appeared in public with his pregnant wife. He told reporters that his relationship with Ashley was just a fling, and that they had only dated for a couple of weeks. He said he believes that he will eventually be able to disconnect from his character in Zombie. His reasoning is similar to what Ashley gave at her press conference, when she too said that she dated Jackson because she couldn’t get out of character.

Jackson’s response seemed to have hit a nerve in Brian. At around midnight, Brian responded to Jackson’s comments on Instagram, calling out the Mr. Hong Kong winner as a big liar.

“How can a person still be able to stand so high even after lying?” he wrote, and added a Jackson Lai hashtag. Benjamin Yuen (袁偉豪)， Adrian Chau (周志文), Jazz Lam (林子善), and more had liked his post.

Reporters reached out to Brian for clarification, who said, “I was definitely acting on emotion last night. But if a person is still standing tall after saying a lie, and that person is lying because he needs to protect his pregnant wife’s heart and his family, then I will suck it up. As for what lies, he knows!” Brian added that he will not leave Ashley’s side, and will be staying with her through thick and thin.

As for claims of him being a liar, Jackson responded with, “No comment.”