Celebrities Select Their Choices For TV King and TV Queen 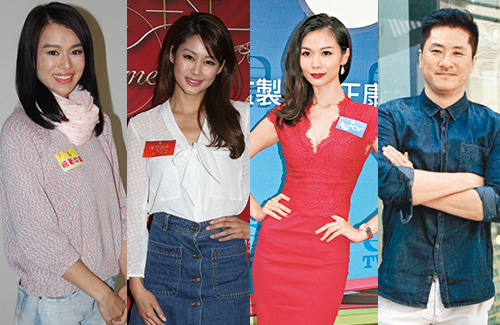 A TV King and TV Queen poll being conducted on Facebook is making its rounds on social media. The poll, which is started by Oriental Daily, asks Hong Kong netizens to vote for their favorite nominees from this year’s Best Actor and Actress nominations for the upcoming TVB Anniversary Awards, coming this Sunday.

Even celebrities are joining in the voting fun. Former TVB actress Myolie Wu (胡杏兒) said, “For TV King I have to choose Anthony Wong (黃秋生). We worked on Lord of Shanghai <梟雄> together. He is seriously at the level of a Film King, and seeing him film for TVB is such a draw for audiences. He’s very charismatic, and I will definitely support him!”

As for TV Queen, Myolie immediately selected Ghost of Relativity’s <鬼同你OT> Nancy Wu (胡定欣), her close friend. “How can I not choose you, Nancy Wu? It should be you. It’s your time!”

Under the Veil’s <無雙譜> Eliza Sam (岑麗香), who is contending for Best Actress herself, is putting all her votes on her Limelight Years <華麗轉身> costar, Liza Wang (汪明荃). “Her acting in Limelight Years really touches me,” said Eliza. “As for TV King, I choose Under the Veil’s Kristal Tin (田蕊妮),” she joked, referring to Kristal’s male role in the series. She then added, “Oh, she’s not nominated! If that’s the case, I choose Anthony Wong! I’ve been watching Lord of Shanghai, and he’s amazing in it!”

Ghost of Relativity’s Vivien Yeo (楊秀惠) said, “I can only choose one! My good sister, Nancy Wu! For TV King, I choose Ruco Chan (陳展鵬). I’ve filmed several dramas with him before, and he’s an excellent actor.”

Former TVB actor David Siu (邵仲衡) also shared his thoughts: “Give the TV King to Anthony Wong. He’s a really good actor. Let’s not have Wayne Lai (黎耀祥) win every year! Let him rest! As for TV Queen, I quite admire Nancy Wu.”

Ruco Chan Still In the Lead

Captain of Destiny’s <張保仔> Ruco Chan remains to be the favorite TV King among netizens, as he is still leading in the votes a week after the poll’s launching. As of December 9, Ruco has collected over 7,000 likes. Momentary Lapse of Reason’s (收規華) Louis Cheung (張繼聰) is in second place, with over 760 likes. Lord of Shanghai’s Anthony Wong is in third place, with 430 supporters.

Limelight Year’s Linda Chung (鍾嘉欣) is still leading in the TV Queen side of the battle, with over 4,600 likes. Nancy is in second place with 2,000 supporters. Third place is Lord of Shanghai’s Alice Chan (陳煒), with almost 800 votes.