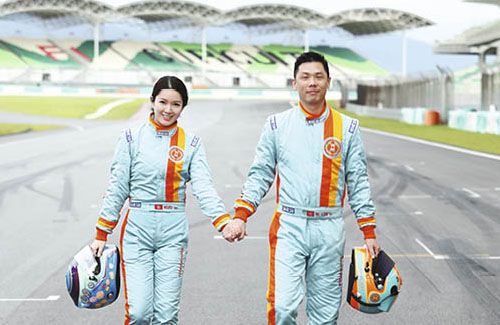 It has happened! Christine Kuo (苟芸慧) is finally engaged!

The former TVB actress announced on social media yesterday that she is now engaged to professional racer William Lok (陸漢洋), who she has been dating since early 2017. The 34-year-old beauty queen announced the great news via Instagram on the day before Valentine’s Day. She posted two pictures, one which had William sneaking behind her, and another of Christine wearing the engagement ring on her finger. According to reports, Christine’s engagement ring was worth HK$1.7 million from Tiffany & Co.

Christine wrote, “[I’m] so happy. I’ve finally found the person who I can watch the sunset with forever.”

William also announced the news on his personal social media account, writing, “520993334!” (I love you Kuo Kuo [for all] three lives [and] three worlds!)

Christine, a fan of auto racing, started seeing William in early 2017. At the time, Christine said her relationship with William was still developing, and was hesitant in calling him her boyfriend. They confirmed their relationship in June last year, and Christine was spotted attending William’s races. She also became the ambassador for William’s race team, Win Motorsport. The Tiger Cubs <飛虎> actress couldn’t contain her happiness when she was interviewed by the Hong Kong press later that day. Saying she feels wonderful, Christine expressed, “Although we already saw each other as marriage partners, the happiness I felt from the moment it happened  is still so hard to describe! We are very grateful for the support and care from our family and friends. We are also thankful for all of the blessings and care we’ve received from everyone. You guys all bear witness to how this relationship blossomed, thank you! Today, we are officially announcing that we have decided to hold hands together as we step into the next stage of our life.”

As for William, he told the media that he is “the universe’s happiest man.” He also said his life is now complete. “Thank you for everyone’s blessings. I have thousands of words to say in my heart, which I cannot all write out in paper. To be able to spend the rest of my life with Christine, I know I am already the universe’s happiest man. My life is finally complete!”