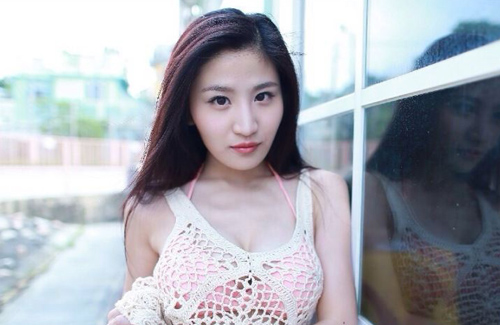 Coffee Lam (林芊妤) suffered negative publicity since her 30-minute restroom scandal with rich heir, Will Lam (林知譽). Since her behavior was considered to be a disgrace, Coffee was officially fired by TVB last week. In a recent interview with the press, Coffee explained in detail what had happened inside the restroom stall, and emphasized she did not engage in any inappropriate behavior like tabloids claimed.

After the scandal came to light, reporters were unable to contact Will, who had left for Hangzhou. Coffee was left to deal with the incident alone. However, Coffee spoke up for Will and emphasized he is a good person. She stated he is a filial man, and they first became close through talking about family matters. When asked if Will was the one who pulled her into the restroom at the time, Coffee revealed, “Yes, he was! I didn’t clarify it earlier because I didn’t want to hurt this man.”

Pressed for details about what the pair exactly did in the disabled public restroom inside the IFC Mall, Coffee spilled, “We didn’t have sex in the restroom. I was very drunk and uncomfortable, so I threw up that night. Will brought me to the restroom and later kissed me. I also like him, and my groans were a natural reaction. Afterwards, a cleaning lady knocked and asked if anyone is inside. At that moment, I really wanted to quickly get out of there, so I told Will I’m heading home first. I sensed there were others waiting outside and it scared me out of my drunken state. It didn’t occur to me that reporters were waiting, so I was shocked when I opened the door.”

Although Coffee respects TVB’s final decision in terminating her management contract, she expressed she cannot accept the fact that the company thinks she is trying to use the scandal as a publicity stunt to promote herself. Coffee exclaimed, “No one is willing to take their own future, family, and chastity to do such a thing.”