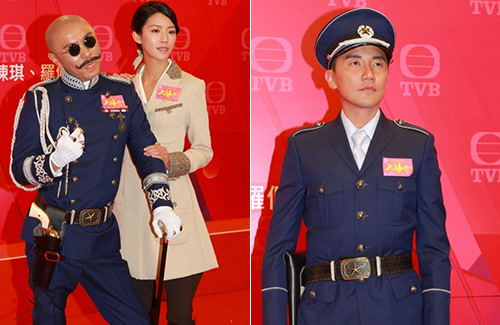 Starring Dicky Cheung (張衛健) in his first TVB drama in 21 years, The Learning Curve of a Warlord <大帥哥> held its first costume fitting press conference in Tseung Kwan O on Friday. The comedy drama, which takes place during the warlord period of China, will be part of TVB’s anniversary drama lineup. Produced by Steven Tsui (徐正康), the production period for Warlord is expected to be around six months.

“When I first received news of casting, I didn’t believe it,” said Sisley. “But now, this information has seeped in and I’m excited. I met [Dicky] for the first time a few days for our costume fitting, and it was amazing. I can’t believe it’s real. So real. I’m so happy.”

Dicky is known for his sharp and quick-witted acting, which tends to stress out his co-actors who have less experience. “That’s great,” said Sisley. “Hope I can learn some more from him. Maybe I’ll become an ‘old fire soup’ [simmered soup] after making soup with him for six months.”

Tony said, “There’s going to be pressure, but we’ll treat it as our driving force. [Dicky] is one of the kings of television. Hopefully we can learning a lot from him. Really looking forward to this collaboration.”

When the cast were introducing their roles, Tony shared that he used to dream about fighting demons alongside Dicky in 1996’s Journey to the West <西遊記>, which was also Dicky’s last TVB drama. “That’s why when I saw Dicky just now, I couldn’t help but to call him by his nickname on the show.” Dicky then turned to Tony and asked, “You were on the show?”

Tony was then teased for being bold and disrespectful for calling Dicky by his nickname. The Married but Available <我瞞結婚了> actor immediately explained, “I couldn’t help it! I felt so nostalgic and warm after seeing him!”