Dissatisfied with Yang Mi’s Studio, Fans Organized a Boycott and Made 7 Demands 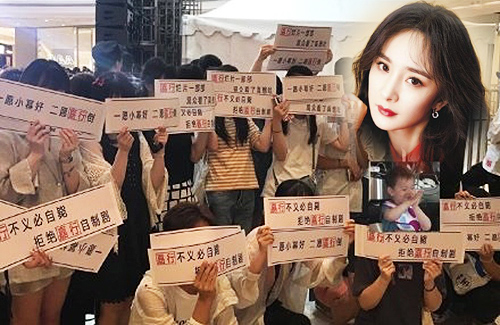 Few artistes have fans as dedicated as Yang Mi’s (楊冪) supporters. With the recent questionable quality of Yang Mi’s dramas with Jay Walk Studio, some fans are worried that her newest project from the studio may damage the 32-year-old actress’ image. To support Yang Mi, the fans are threatening to boycott Jay Walk Studio and brought forth seven demands.

As fans look at Yang Mi’s dramas that were produced by Jay Walk such as Negotiator <談判官>, The Great Craftsman <筑梦情缘> and V Love <微時代>, fans notice that Jay Walk Studio dramas’ ratings are usually mediocre and fail to achieve a perfect five-star rating. In addition, fans discover that Yang Mi usually stars alongside with the same group of artistes and are suspecting that Jay Walk Studio is using Yang Mi’s name to promote new artistes.  Coupled with the lack of fresh faces and the decreasing quality of the dramas, fans are increasingly worried for Yang Mi.

On Sunday, Jay Walk Studio announced their next project titled Getting You a Warm Sunlight<許你的暖暖晨光> with Yang Mi as one of the leads. Yang Mi’s fans swiftly reacted and voiced their concerns online. Many fans felt that the drama will be a disaster and the result will negatively impact Yang Mi’s image. In order to protect the actress, her fan clubs requested to meet with Jay Walk Studio to get a confirmation of Yang Mi’s role and a list of her co-stars.

To the surprise of many fans, Jay Walk Studio responded and criticized the fan club’s lack of knowledge of the industry, deleted their social media page and refused to further communicate on this matter.

This move caused fans to be increasingly dissatisfied with the studio. In retaliation, fans collectively went to Weibo and changed their profile picture to “Resist, Boycott Jay Walk Studio.” The boycott has been gaining grounds and some fans even attended Yang Mi’s public event carrying posters urging people to boycott Jay Walk Studio.

TAGS: Getting You a Warm Sunlight, Yang Mi

7 comments to Dissatisfied with Yang Mi’s Studio, Fans Organized a Boycott and Made 7 Demands