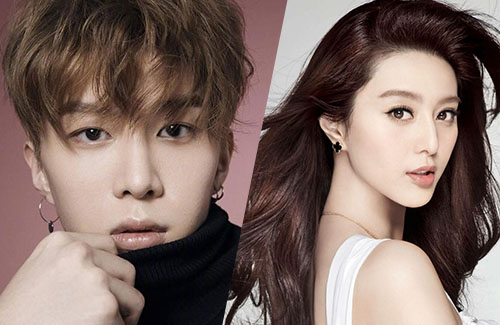 Shortly before the premiere of China’s boy group survival show Idol Producer <偶像练习生> in January, tabloids revealed that Fan Bingbing’s (范冰冰) 18-year-old younger brother Fan Chengcheng (范丞丞) would be competing on the show. Fan Chengcheng is an idol trainee signed under Yuehua Entertainment, and had received K-pop training in South Korea shortly before returning to China for Idol Producer. At only 18 years old, Fan Chengcheng is 19 years younger than his superstar older sister. At the time of his birth, Fan Bingbing was riding on the popularity of My Fair Princess <还珠格格>, which earned her widespread fame across Asia. Due to their big age gap, many tabloid magazines speculated that Fan Chengcheng was actually Fan Bingbing’s illegitimate son, but to protect her budding popularity, Fan Bingbing had to introduce Fan Chengcheng as her younger brother instead.

Fan Bingbing was drilled by numerous famous television hosts about the mysterious birth of Fan Chengcheng at the time. Some even pointed out that China’s then One-child Policy would not have allowed Fan Bingbing to have a sibling, but the actress wrote off these rumors with a laugh: “He is my younger brother!” she said in one interview. “He is my mother’s child, but because of [the one-child policy], we were fined, but we paid the fee. He really is my younger brother.” She also clarified on Weibo that her mother considered not having him, but she convinced her mother to keep him. “To have a baby at an older age is a happy thing.”

These rumors of an illegitimate child never stopped. The gossip surrounding Fan Chengcheng’s birth continue to happen among industry insiders even today, but should these insiders even be surprised? There’s always been this unspoken rule in the entertainment industry, that the bed gives you the money. The bed gives you the movie deal. This industry has always been dominated by male giants that take advantage of women, and it is one of the many reasons why the “me too” movement is so important today. Chinese actress Jiang Xin (蒋欣), best known for her portrayal as “Consort Hua” in the popular 2011 TV drama Empresses in the Palace <后宫·甄嬛传>, once talked about this “unspoken rule” in a television interview.

“Picture this,” she said. “A bunch of photos right in front of you, and the directors would come together to look at them. One of them would say, ‘Ay, this niu’er [sexual way of saying ‘girl’] is not bad.’ If he had held up my photo at the time, I would have slapped him. What are you? You are an assistant director. You are here to choose actors. How many people did you end up ruining? As long as I am still in this industry, I want to be able to stand up one day and tell these immoral people that they are destroying not only this industry, but this society.”

It doesn’t come to a surprise that these rumors of Fan Bingbing and Fan Chengcheng have come about. To survive, a woman must go through the unthinkable to prevail in our patriarchal society.

But whether or not Fan Chengcheng is really Fan Bingbing’s son or not, the young idol-to-be is wise beyond his years, much like his older sister. His appearance in Idol Producer has already showed that he is capable of success. Only time will tell the future.