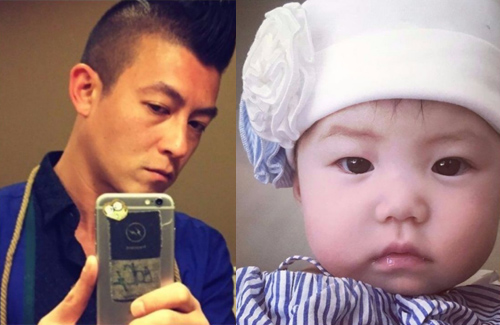 Although reports claimed that 36-year-old Edison Chen (陳冠希) and his girlfriend, 27-year-old Shanghainese model Shupei Qin (秦舒培), were expecting, the couple did not address the reports. It was not until June, when a friend posted a photo of Edison holding a baby girl and celebrating the baby’s 100th day of birth that substantiated the claims. In addition to keeping their relationship under the radar, the couple has also been keeping the baby girl’s birth under wraps.

However, Edison seems to finally be ready to introduce his daughter to the world. Recently, the first-time father posted a headshot of his daughter, revealing her appearance to the world. He shared that her name is “Alaia.” Already five months old, baby Alaia is extremely adorable, with large, doughy eyes and small lips. From the photo, she seems to resemble her mother more.

Although many fas complimented on Alaia’s adorableness and congratulated Edison, many are still in shock that Hong Kong’s notorious “bad boy” is now a father. Perhaps fatherhood will tone down his temper and compel him to mature.