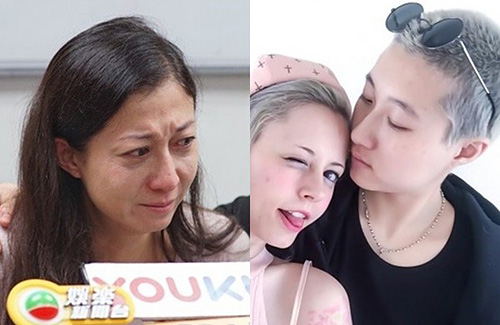 While Jackie Chan (成龍) splurged on a new airplane for himself, ex-lover Elaine Ng (吳綺莉) has been struggling with the latest drama involving their 18-year-old daughter, Etta Ng (吳卓琳). Through a middleman, Jackie had once said he “would not give a cent to Elaine.” Losing her radio hosting job in 2015, Elaine had to accept financial assistance from a Buddhist charity to make ends meet. Admitting to being an alcoholic earlier, Elaine’s relationship with Etta has deteriorated significantly in the last two years.

Elaine spoke earlier about why her relationship with her daughter was so turbulent, “[Etta] grew up in a single-parent household, and our situation is very peculiar. Just because I have accepted the situation doesn’t mean she can accept it. As a mother, I neglected her feelings a lot back then. It accumulated over time. It caused her to feel a lot of pressure until she finally exploded.”

After being treated for suicidal tendencies, Etta moved out of Elaine’s house to live with her girlfriend, Internet personality Andi last year. Soon after, Etta left her job and allegedly disappeared for five months. Family and friends could not contact Etta, who vanished from social media since last November. Next Magazine reported that Elaine panicked and filed a missing person’s report with the Hong Kong police.

When asked if she had filed the case with the police, Elaine said, “I don’t want to talk about it anymore!” However, Elaine revealed that she has spoken to Etta several days ago and knows she is at a safe place. “She is living at a friend’s house. I hope the friend treats her well. The most important thing is Etta’s safety!”

Asked if she has seen Etta in person or whether they only spoke on the phone, Elaine said, “I don’t want to say too much!” But she did admit that Etta is currently not in Hong Kong.

As her daughter is not always by her side, did this frequently worry Elaine? She said, “No, I have my own life. There are many reasons why our children are not beside us, such as going away for school. It’s a phase. It’s not a problem for her to have independence.” When asked if Etta is currently working or going to school, Elaine said, “I don’t know! Her safety is most important. She should be going to school and be a healthy person.”