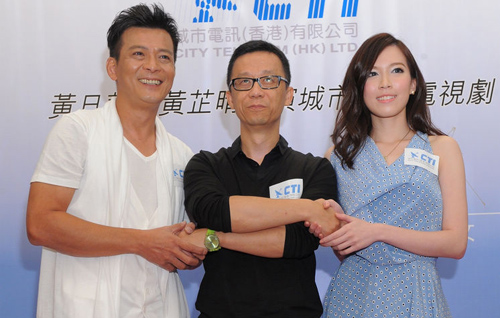 On July 26th, Felix Wong (黃日華) and his 22-year-old daughter, Adrian Wong (黃芷晴), accepted a Commercial Radio interview with radio personality Eileen Cha (查小欣). Felix and Adrian, who just signed with Ricky Wong’s (王維基) CTI earlier this month, expressed their excitement in working with the new television station. They will collaborate in a new CTI detective drama, The Open Brain of Watch and Exploration (開腦儆探), which will begin production next month.

Asked if Ricky Wong offered Felix a hefty price for their contract, Felix denied and laughed, “But I do get different prices every day!”

Although Felix’s daughter, Adrian, had performed in school plays before, The Open Brain of Watch and Exploration will be her official acting debut. She disclosed that she has already begun taking acting classes at CTI.

Felix will also be Adrian’s mentor and personal director to guide her acting. He warned that her “hell-like training” will begin soon! Felix also revealed that when Adrian was younger, she wanted to be a street cleaner so she would be able to serve society.

Adrian, who will be graduating from Hong Kong University this year, is also in a steady relationship with her boyfriend. When asked about his thoughts on Adrian’s boyfriend, Felix said, “He’s very shy and diffident! He’s even shyer than me when I first got in the business.”