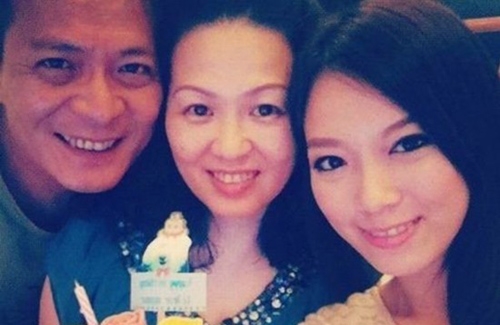 Felix Wong‘s (黃日華) wife, retired actress Leung Kit Wah (梁潔華), was suspected of having leukemia since last November. However, the Wong family wished to keep Kit Wah’s illness under wraps to allow her to recover in privacy, only revealing that she had scurvy instead. Although Kit Wah was hospitalized frequently for long periods, Felix remained positive and brief in his public statements. Seeing that her mother has been recovering well, Adrian Wong (黃芷晴) finally admitted that Kit Wah has indeed been suffering from leukemia for the last half year.

Facing the press with a big smile yesterday, Adrian said, “This is the last chemotherapy treatment. Doctors said there’s no need for a bone marrow transplant right now. She doesn’t not need to stay in the hospital for a lengthy period. She will return home after she grows stronger.” Possessing a positive outlook and surrounded by a supportive family, Kit Wah even gained weight during her illness. She should be able to return home this weekend in time to celebrate Father’s Day with Felix.

Adrian revealed that Kit Wah continued to work throughout her illness. Kit Wah invited staff from her insurance firm to hold work meetings at the hospital, keeping her mind occupied and off her health worries. Kit Wah even joked that she has been “very busy and did not go on a big break” while being treated for leukemia.