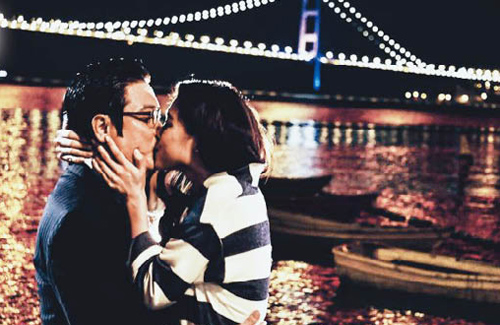 In recent weeks, Gallen Lo (羅嘉良) and Bernice Liu (廖碧兒) have been filming the drama adaptation of Internal Affairs <無間道> in Mainland China. Portraying a couple in the series, Gallen and Bernice filmed a romantic kissing scene by the waterfront.

Under the direction of TVB producer Tommy Leung (梁家樹), Eric Tsang (曾志偉) will reprise his triad boss role as the villainous Hon Sum. Although Hon Sum was the main antagonist in the movie, Gallen will be featured as the web series’ new main villain. In one scene, Gallen gave a heartfelt speech before proposing to Bernice, who plays his love interest in the series. To ensure the scene went smoothly, Gallen bought two bottles of wine out of his own pocket and drank a few glasses with Bernice before filming the scene. The alcohol had the desired effect and the kissing scene required only two extra takes.

When asked if Gallen had to notify his wife Sophie Su (蘇岩) of the kissing scene beforehand. The actor laughed, “Nope! My wife is an actress so she understands! The wine allowed us to enjoy the experience and get into character easily. Bernice was very professional and the scenery was stunning. Just the tidal waves would occasionally ruin the beach scenery.”

Bernice admitted she ate some mint candy to prevent potential bad breath. “I like to eat a lot – especially food with garlic so I had to prepare a lot of mints! Gallen’s speech was moving during the proposal scene. With the beautiful backdrop, the kiss went very smoothly.”