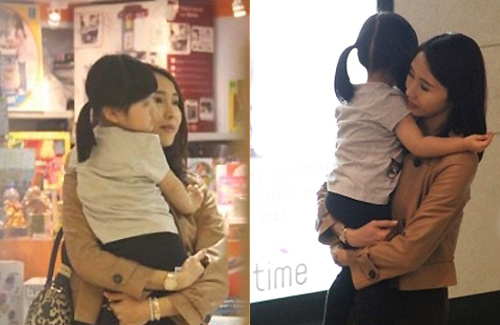 After retiring from the entertainment industry in 2008, it has been rare to see Gigi Lai (黎姿) in public. The mother of three was recently spotted taking her youngest daughter Pegella out for a shopping spree in Central, while accompanied by her maid.

The 43-year-old former actress married businessman Patrick Ma (馬廷強) in 2008, simultaneously announcing her retirement in acting in order to spend time managing her brother’s business and take care of her family. Her last project was TVB drama, The Gem of Life <珠光寶氣>.

Although aware of the paparazzi’s watch, Gigi did not attempt to hide her daughters from the public’s eye. A few days ago, Gigi was seen taking her two-year-old daughter Pegella to a shopping mall in Central. Pegella is said to look like a miniature version of Gigi, and has the same thick eyebrows as her mother. Wearing heels and a short skirt, Gigi looked as fit as ever.

Gigi purchased many toys for Pegella, including a large children’s kitchen set. At a clothing store, Pegella grew impatient and threw a temper tantrum, refusing to try on clothes. This angered the maid, who pointed a finger at her and scolded her. However, Gigi quickly returned to Pegella’s side to pacify her. One of the store’s associates also gave Pegella a book to read.