In September, Gillian Chung (鍾欣潼) experienced quite a scare when she accidentally fell in her hotel in Xiamen and hit her head on the bathroom floor. She ended up with severe injuries and a two-inch wound on her orbital bone.There were concerns that Gillian’s wound would leave a permanent scar on her forehead, but luckily Simon Yam (任達華) referred her to a doctor renowned for his skill. Staying in China for the past two months to rest, Gillian finally returned to Hong Kong yesterday.

Gillian’s flight arrived in Hong Kong at 2 p.m., however all passengers needed to undergo COVID-19 testing at the airport and were required to wait for the results before they could leave. Kept in the restricted area of the airport for over eight hours, Gillian and her two assistants were only given two packs of biscuits to snack on. The trio were finally released at 11 p.m.

Despite the long wait for COVID-19 results, Gillian was not too tired when she saw reporters waiting to speak to her and took the initiative to politely greet them. Giving an update on her injury, Gillian lifted up her hat for reporters to take a look. The centipede like staples have almost vanished, and all that is left is a one to two inch scar above her right eyebrow.

The healing of the wound would need to be monitored for three months before undergoing dermabrasion to smooth out its appearance. The clinical beauty company that Gillian endorses promised to take care of all the procedures. When reporters asked if she will be sleeping with the lights on to prevent future accidents, Gillian laughed, “I don’t think so! I can’t sleep if there is light!”

Initially, there were worries that Gillian’s scar would affect her work projects, but it had no impact at all. Her workload in China is increasing, and Gillian will resume filming web drama Forensic JD <女法醫JD> with Charlene Choi (蔡卓妍) and Joseph Chang (張孝全) in mid-November in Hong Kong. She is also slated to be the female lead for two new films. With her quarantine period being the only time she is able to rest, Gillian is not sure how her work schedule will be for Lunar New Year. Many colleagues are envious that she has so many jobs lined up even during the difficult time of a pandemic. 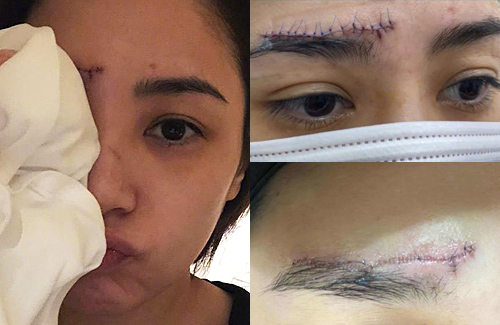