Grace Chan is Shopping for a Wedding Dress? 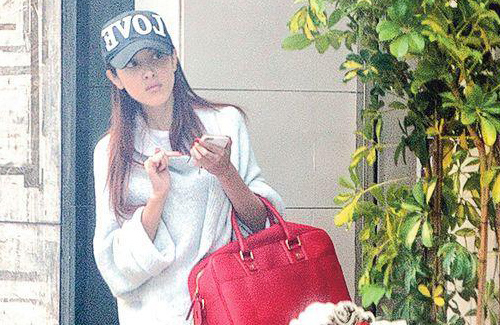 Dating for less than a year, Kevin Cheng (鄭嘉穎) and Grace Chan (陳凱琳) are in a blissful relationship. Grace was spotted spending an hour inside a bridal boutique yesterday, presumably looking at the wedding dresses. Could Grace be thinking about marriage?

Since his work commitments in Mainland China ended, Kevin has several days off and has been spending nearly all of them with Grace. He has even been ferrying Grace around for her engagements. Recently, Grace was spotted lingering at bridal boutique, Vivian Luk, while waiting for Kevin to pick her up.

Since Kevin is already 46 years old, he is allegedly growing anxious about marriage and has already proposed to Grace, but failed to win the approval of her parents. While Grace’s parents want her to take it slow with the relationship, she has fallen head-over-heels in love. Kevin in turn appears to be smitten with Grace. The couple has been spotted on dates all over Hong Kong.

After Grace got into the car, Kevin did not drive straight back to his apartment, but took the car to a garage before continuing on their way.

19 comments to Grace Chan is Shopping for a Wedding Dress?