It has been 16 months since Jacqueline Wong (黃心穎) and Andy Hui’s ( 許志安) cheating scandal was exposed, and all involved parties have moved on with their lives. Kenneth Ma (馬國明) is now dating Roxanne Tong (湯洛雯), and Jacqueline is speculated to be dating RubberBand’s drummer Lai Man Wang (黎萬宏) after being spotted on several outings together. Seen on dates with her dog in tow, Jacqueline surprisingly continues to lead a lavish lifestyle even though she has not worked in over a year.

Due to her scandal last year, Jacqueline’s image hit rock bottom and did not have any job offers despite an outstanding contract with TVB. At the height of the furor, she escaped to the United States and has since returned to Hong Kong. She has been out of work for 16 months and counting, but remains a target of paparazzi.

Though without any work for over a year, she is still living a wealthy lifestyle. Prior to her scandal, Jacqueline frequently showed off her designer goods including a $70,000-Hong-Kong-dollar Hermes Birkin Bag and luxury watch. Not much has changed recently, as she is still seen wearing designer brands including a Gucci bag while out for a walk.

Aside from her preference for luxury goods, Jacqueline also lives comfortably. In 2017, she put down a down payment for a 500-square-foot property in Kowloon and pays a monthly mortgage of HK$30,000. Jacqueline currently rents a unit in Yau Tong for about HK$20,000 a month. 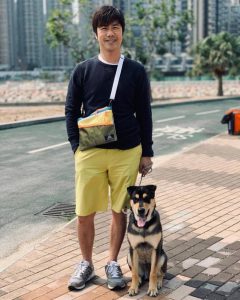 It is alleged that Jacqueline and Lai Man Wang have been secretly dating for half a year. Neighbors stated that they witnessed Lai Man Wang often visiting Jacqueline’s condo unit, and the pair shopping at a nearby supermarket.

Known for his similar appearance to DJ Jan Lamb (林海峰), Lai Man Wang grew up in a middle class family and worked as a computer programmer before joining the entertainment industry. He owns a 600-square-foot property in Tai Kok Tsui, which is currently valued nearly $10 million Hong Kong dollars. Though he cannot be classified as extremely rich, he definitely does not have to live paycheck-to-paycheck.

While the two seem to have nothing in common, they have actually known each other for several years. Back in 2016, Jacqueline posted a group photo on Instagram with Lai Man Wang, On Chan (陳健安) and King Wu (吳崇銘) from C AllStar, and Siu Wu (小胡) from Yellow asking fans whether they wanted to listen to this refreshing group. Lai Man Wang was not instantly noticed as the photo was dark and he was hidden in the back corner.