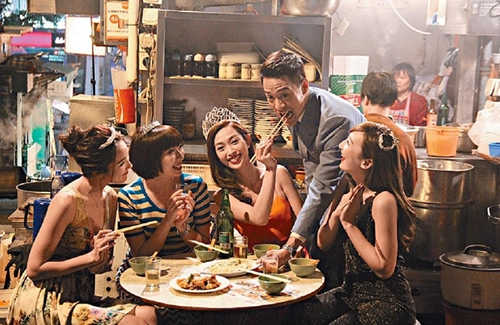 TVB artists Jason Chan (陳智燊) and Sarah Song (宋熙年) showed their Hong Kong spirit in some wedding photos they took at a food stand in Central, Hong Kong, a few nights ago. The couple, who have been together for over six years, will be tying the knot in late 2016.

38-year-old Jason and 30-year-old Sarah stood out among a crowd of Hong Kong diners when they arrived at an outdoor food stand dressed in formal wear. Jason wore a fancy gray tux while Sarah wore a deep-V orange dress and her silver Miss Chinese International crown. Sarah’s bridesmaids—Leanne Li (李亞男), Sherry Chen (陳爽), and Samantha Ko (高海寧)—were also present. The photoshoot was extremely candid, and the photo taking sessions continued even while they ate their food.

On why they chose to take their wedding photos with a food stand backdrop, Sarah said it was Jason who suggested the idea. The Scoop <東張西望> presenter explained that although they were brought up in different countries (Sarah is from Australia while Jason is from England), they both met in Hong Kong and developed their careers there.

“We wanted to include some authentic Hong Kong photos for our wedding, and the food stands give the most genuine appeal,” said Sarah. “I really want to thank my three sisters for taking some time off to do this photoshoot with me. I’ve been working nonstop for ten days, and although I am quite exhausted, getting together with everyone to take these photos is really hard to come by. It is exhilarating.”

Due to work obligations, Jason and Sarah had to postpone their wedding to late 2016. Besides Hong Kong, they will also hold weddings in Australia and England for their family and friends.