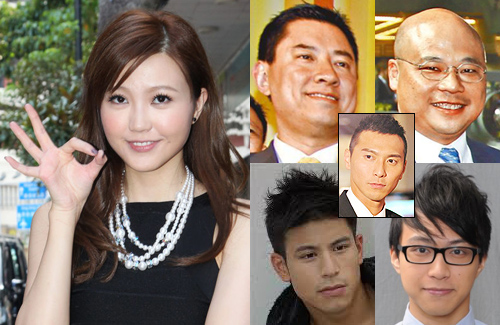 Singer-actress Jinny Ng (吳若希) may only be 23 years old, but she has “amassed” a collection of about fourteen men to her romantic resume. Currently, she is allegedly simultaneously romantically involved with five men, including accountant Vincent Kwok (郭志燊) who is in his mid-fifties; 50-year-old property tycoon Timothy Lam (林棣權); TVB actors Alan Wan (溫家偉), Wong Tsz Hang (黃子恒), and singer-actor James Ng (吳業坤).

Jinny appears to have received plenty of benefits from her romances, as she is reportedly living in a luxury apartment that costs approximately $5,000 USD in monthly rent and driving a Porsche worth about $258,000 USD despite only having an estimated monthly income of about $6,450 USD.

Jinny and Vincent Kwok became romantically linked because of Jinny’s current luxury car, which bore the car plate initials “JN”. A title search on the car revealed that it was not registered in Jinny’s name, but in the name of Taiwan Trade Ltd, a company where Vincent is a director. Another luxury car (a Mercedes-Benz) that Jinny was previously spotted driving was also discovered to have been registered in the name of Taiwan Trade Ltd.

When the media approached Vincent with queries, he was not very forthcoming and emphasized that it was a matter of his personal privacy. He then added that he had heard of Jinny from the press, but was otherwise a married man and an accountant who did not wish to receive too much public exposure.

Real estate tycoon, Timothy Lam, had allegedly gifted Jinny with a luxury property in Happy Valley, as well as an electric car worth $103,000 USD. To prove the rumors false, Jinny disclosed her Whatsapp conversation record with Timothy.

However, when Jinny’s mother was hospitalized due to a bicycle accident earlier this year, Jinny admitted that Timothy had asked after her. Jinny even revealed that she had known Timothy for nine years. This nine-year “relationship” between the two had reportedly ended due to objections from Timothy’s friends. However, Timothy insisted on keeping in touch with Jinny, at the expense of falling out with his friends.

According to an anonymous source who is a good friend of Timothy, Jinny is not too pleased with how strict Timothy can sometimes be with her, and had attempted to distance herself from Timothy.

On a charity show, singer James Ng donated of $523 HKD. This was linked to Jinny’s birthday, which was May 23.

James was asked if he was attempting to express his feelings for Jinny through the donation, but he denied it, “No, it’s because she was performing, and I wanted to celebrate her birthday, as well as bless her.”

There was previously also an incriminating photograph of Jinny feeding James. He explained, “That was a photo taken from three years ago. We were together in a big group of friends. We were all hanging out and being playful together. I’m not pursuing her. I’ve been so busy with filming Come Home Love <愛．回家>.”

On whether it was true that Jinny had many suitors, James said, “I don’t know. But I think she is a very good person.”

Jinny’s rumors with Wong Tsz Hang started because of their collaboration in Angel in the Making <實習天使>. The two were subsequently photographed enjoying a meal together, and having what looked like an intimate chat by the harbor.

When Jinny’s mother was hospitalized, Alan Wan gave her the greatest support. Spending a lot of time with Jinny to comfort her, he also time out to babysit Jinny’s younger brother.

In response to the rumors between her and the five men, Jinny said, “I’m not responding. There are too many rumors. I am not dating anyone. I don’t have time to do so.”

On why her car was registered in the name of Vincent’s company, Jinny responded, “I can be considered one of his employees.” As for the significance of her car plate number, Jinny deflected the question and said, “This is a very good car!”

6 comments to Jinny Ng is Simultaneously Involved With 5 Men